It’s terrifying!  Children being eaten by dinosaurs!  It’s a Jurassic horror show all over again!

*disclaimer: no children were harmed in the making of this interview (OR book).

Oh dear readers, have I got a treat for you today.  If you haven’t had a chance yet to read the latest picture book by Ryan T. Higgins, “We Don’t Eat Our Classmates,” stampede out to your nearest bookstore and get it right now!  NOW!

You’re still here?  Well, that’s perfectly fine too as I cannot wait to share this book with you.  My husband and I were actually debating about this book.  Debating.  My husband claims this is Ryan’s best work to date.  I don’t know if I can go quite that far (because of my undying love for “Mother Bruce”), but it is quite delightful.  The comedic timing and exquisite balance between text and illustration are pitch perfect!  Yes, we’ve talked about this book a lot.  And as with all of Ryan’s other books, I’ve shared it a lot too.  And giggled a lot.  But I digress.

If you’re not familiar with Ryan’s work yet, let me introduce you.  Ryan T. Higgins has written and illustrated several picture books (including that loveable grumpy bear “Mother Bruce”).  He is also passionate about motorcycles.  He has even visited my blog before to discuss Bruce.  You can learn more about him at his website and see his great sense of humor.  Don’t believe me?  Well, I’m guessing his dad (the one in the bear costume here) could say a few things about that.

“We Don’t Eat Our Classmates” is a hilarious story about little Penelope and her first day of school.  What makes this funny (and challenging for Penelope) is that children are delicious.  I think you can see where this story might be headed (and I don’t want to give away the punchlines). 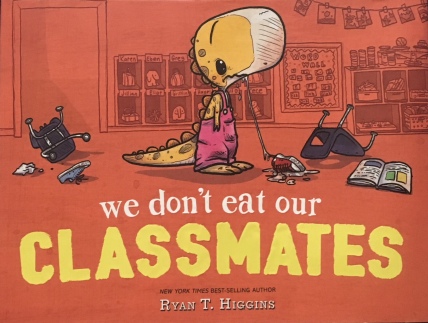 Welcome back to the blog Ryan

Me: Dinosaurs are an evergreen topic in picture books, but I must admit I never thought of a baby dinosaur’s first day of school and the unique challenges you present in “We Don’t Eat Our Classmates.”  What gave you the idea for this story?

Ryan: This is one of those stories that formed organically and bit by bit over time. I don’t recall when exactly I came up with the idea or what sparked it. Subconsciously, I was dealing with all the feelings that went along with my eldest son preparing to enter kindergarten. Like most of my books, I don’t really know where it came from until I look back and think about it.

Me:  In the last Simply 7 interview we did, we talked about your background in biology (& ecology) and how that tied in perfectly to your animal characters.  Yet this book kinda leaves that behind.  Why a dinosaur?  How did the delightful character of Penelope evolve?

Ryan:  I’ve loved dinosaurs since I was young and this was a way for me to humor the kid in me.

Penelope needed to be the character that everyone related to when they read this book. I was very concerned that a few readers might get a little too scared about children being “eaten” if they related to the kids more than Penelope. That meant Penelope had to be as cute and innocent looking as possible, with a more expressive face.

It was a long process to come up with just the right character design. She needed to  be cute, but not annoyingly so. I settled on a big boat-shaped head with eyes down low on her face. Bringing the eyes lower on a character automatically makes it look more like a baby. Adding spunky pink overalls gave her more character…and Penelope was born.

Me: I think she’s adorable!  But not in an annoying way at all.  I know you have plenty of other projects in mind for Bruce (yeah! keep going!), but do you think there might be other stories in the future for Penelope as well?

Ryan: Maybe. Right now I feel like Penelope’s story  was a single arc  that is all done…but I may revisit her. I change my mind a lot. However, I do like Walter, the goldfish. I kind of want to know more about him. There are no plans to make a story for him, but…I never know where my brain will take me.

Me: Ha! That would be awesome. I want to know more about Walter too! He was one of my favorite parts in the book.  Speaking of dinosaurs, one of the things I absolutely love about your book designs are the unique end papers (and secret hidden pictures under the paper book covers on the hardback versions too!).  Did you draw all the end paper dinosaur pictures?  Or did you have help?

Ryan: That’s my favorite part of the book. All those endpaper drawings are made by kids! My son and daughter and a bunch of their friends drew those. I thank everyone of them by name on the copyrights page. It was so fun seeing how excited the kids were to put their work in a published book. They all took it VERY seriously!

Me: I suspected as much!  I LOVE that!  I don’t recall seeing you draw people or children in any of your Bruce books.  Just animals.  Obviously the storyline here demanded an animal-people world, but was that an artistic challenge for you?  Did you have to design the kids (and teacher) much differently than you designed Penelope?

Ryan: I haven’t drawn people for years! It’s a tricky thing for me. Penelope’s classmates were even more difficult for me because they needed to be cute, but not  super relatable. They are more simplistic…having dots for eyes and little lines for mouths.

There was an added bonus for putting people in a book…several of Penelope’s classmates are based on real people (my son, my daughter, and my editor) and Penelope’s teacher is based on my wife.

Me: Aww!  That’s so cool.  I LOVE the diversity in that classroom.  I also noticed that the look of this book is slightly different than your previous work.  Penelope really stands out in some of the settings because the backgrounds aren’t in full color but are sort of monochrome.  What inspired that change?  Did that present unique design challenges as well?

Ryan: That was a decision my editor, book designer, and I came up with. We wanted to try something new. The focus of the story is Penelope and her internal struggles with NOT eating her classmates. Making the backgrounds more monochrome gives a visual focus on Penelope and helps set that all up. It felt really natural working that way and I’d like to try it again soon.

Me: What is one thing that surprised you in the making of this book that you hadn’t encountered before?

Ryan: Working on a book that deals with social anxieties (making friends) is new to me. I wanted the book to say something without beating the readers over the head with a message. Trying to find that fine line was a challenge. I was surprised with how difficult that was. Oh, and also how hard it is to get sinister expressions on a blank faced goldfish!

LOL!  Indeed!  Dear readers, you HAVE to read this book!  It’s hilarious!  I can’t say it’s the funniest thing he’s ever written, but … it might be.  Then again, I know Ryan has other books coming out that I can look forward to as well.  Like this one due out this fall!! 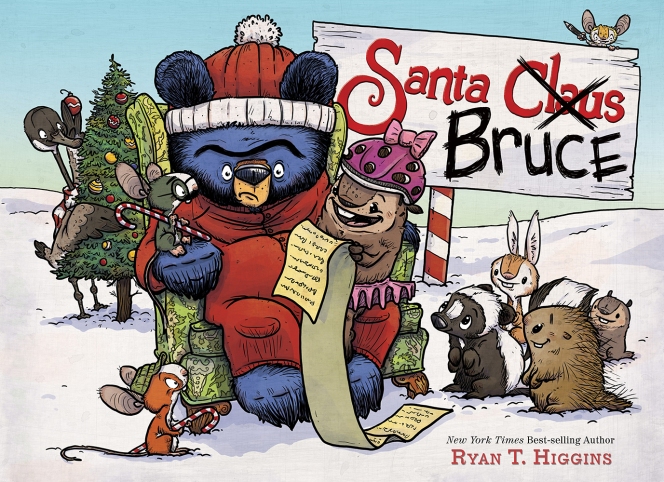