What’s one to do when you have more than one book published very near each other. Well, you have another blog tour! Susanna Leonard Hill visits us today with her newest book (released yesterday!) “The Road that Trucks Built.”

Susanna Leonard Hill is the award-winning author of more than a dozen books for children.  She teaches an online picture book writing class – Making Picture Book Magic – offers picture book critiques, and does frequent school and library visits.  She lives in New York’s Mid-Hudson Valley with her husband, children, and two rescue dogs. You can learn more about her at her website.

Her newest book “The Road that Trucks Built” 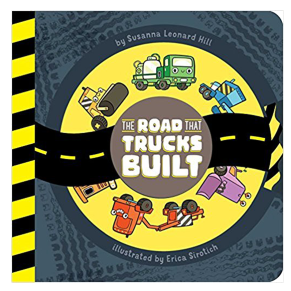 is every bit as adorable as the last two books released earlier this summer.  It features a set of construction trucks that build a road.  That doesn’t sound too novel, but don’t let that fool you.  It’s written in rhyme in a cumulative form akin to “The House that Jack Built.”  Genius!  Adorable AND cleverly written!  You need to read it to believe it.  Especially to enjoy the illustrations by illustrator Erica Sirotich.  I don’t know that I’ve ever seen cuter trucks.

Erica was going to be joining us today to talk about this book as well, but unfortunately time constraints have delayed that discussion until another day.  But don’t worry, that conversation WILL happen.  So stay tuned for that!  And before I go any further, let’s get some of the legal stuff out of the way.  All of the pics used in today’s post are used by permission:

Used by permission of Little Simon

Susanna: Thank you so much for hosting me again, Jena, and for being so supportive of me and my books and helping to launch these new book babies into the world! I so appreciate it, as well as all the readers who have followed along so enthusiastically!

Me: You’re welcome!  We’ve enjoyed having you here and learning all about your books. Let’s talk about “The Road that Trucks Built.”  Construction equipment and/or trucks are an evergreen topic in picture books. What gave you the idea to have them be characters instead of instruments?

Susanna: Hahaha! You’re going to laugh! It actually wasn’t my original idea! I wrote the text as you see it, but the editor wanted the trucks to be characters and asked Erica Sirotich, the illustrator, to draw them that way. I think it was a great idea and came out beautifully! It’s a wonderful example of how collaborative picture books are.   Like when I wrote PUNXSUTAWNEY PHYLLIS – I had imagined lots of furry little brown groundhogs…imagine my surprise when the proofs showed up and they were all wearing clothes! I’d never thought of it, but saw at once how it helped distinguish the groundhogs from each other. Author, illustrator and editors (both text and art) work together to make the best book possible. (Just like the TRUCKS work together to build the road! 🙂 ) 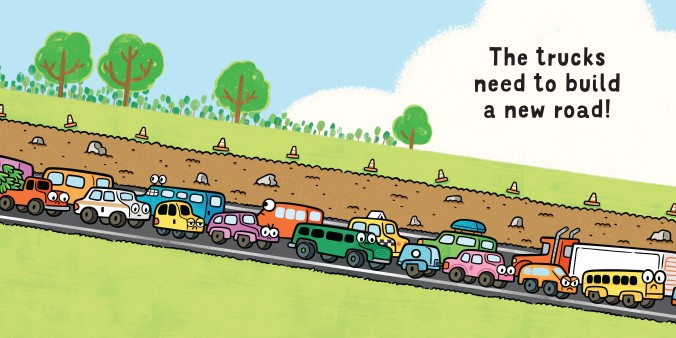 Me: There are LOTS of construction trucks out there. Did you have to pick and choose which ones to use? Were there trucks you had to leave out of this story?

Susanna: I did pick and choose, and I did leave things out. I wanted to show the process of building a road in a fairly simple way that youngest readers could grasp in few spreads.   So I needed to show the basic steps. Clear the path, level it out, spread the asphalt, roll it flat, etc. But. This book is one of three. (I’m hoping you might get to see the other two at some point… but that will depend completely on how this one sells!) Each of the three books shows the process of building something, and I didn’t want any of the trucks to repeat from book to book. So although one WOULD use a dump truck, for example, to carry away dirt or haul in gravel, I did not include it in this story, because the dump truck is in another story. And I was able to tell this story without it.

Me: Ohh! 1 of 3! I hope we get to see the others too. I love these trucks! This story almost reminds me of “The House that Jack Built” though it isn’t entirely cumulative in the same way. You put a very clever spin on the formula to make it work here. Was this something you originally thought of in the first draft of the story?

Susanna: I got the idea for a story about trucks working together to build a house, made a list of trucks I might include, and roughed out a basic story line. It was at that point that it suddenly occurred to me that I was telling a process/how-to story and that it would fit nicely into the framework of The House That Jack Built. From there, I thought, gee…wouldn’t it be fun to also tell how a road was built? So I wrote this story, too, putting them both in The House That Jack Built format.

Me: Did you originally write this story in rhyme? Or did it start out in prose?

Susanna: It started in prose. After I realized how nicely The House That Jack Built could carry it, I switched. 🙂

Me: The cover of the book with the spinning wheel of trucks is brilliant! Was this originally a concept you came up with? Or did the illustrator? Or publisher?

Susanna: I’d love to take credit for it because it’s SO fun! I dare anyone who picks up this book to resist playing with that wheel! 🙂 But it wasn’t my idea. It was the editor’s, as far as I know.

Me: I love the illustrations. The trucks have such a joyful spirit, though I did see a few cranky cars stuck in the traffic jams at the beginning (hee!). Were there surprises for you when you saw the illustrations?

Susanna: I guess I wasn’t entirely sure what to expect? So, there weren’t surprises, exactly, because I didn’t have expectations. But I was delighted! I love their expressions. I love how each one has little identifying features, like the scraper’s toothy grin, and the bulldozer’s flower 🙂 And I love the little construction worker/surveyor birds! 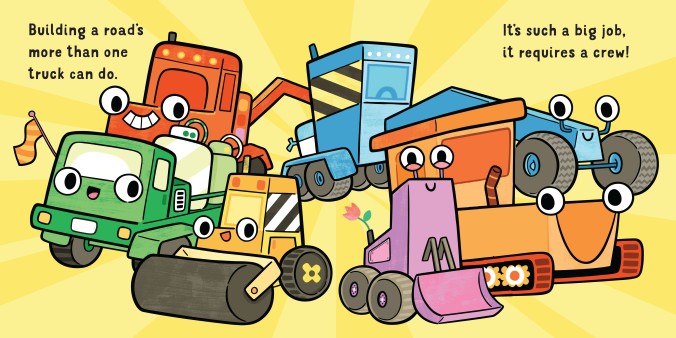 Me: Do you have a favorite construction truck from this book? If so, which one and why?

Susanna: I am very partial to rollers, since my childhood dream of driving one and letting my baby sit on the seat beside me. 🙂 But it’s hard for me to say which is my favorite from this book – they’re all so cute! But I do love that bulldozer with the flower in her smokestack/exhaust pipe! And I do love the scraper’s cheery red-orange color and his white-toothed grin!

They ARE all so cute.  I’d be hard-pressed to pick one favorite too.  Erica really did a fantastic job designing them.  It’s wonderful to see SO many great concepts come together from so many different directions in such a perfect combination: text, illustrations, and book design.

Dear readers, if you haven’t had a chance yet to track this book down, you must do so.  It’s adorable, appealing to a wide audience, and has an incredibly smart text.  AND if you’ve read this far, there’s a GIVE AWAY!  Susanna will be giving one lucky reader a signed copy of “The Road that Trucks Built.”  Enter the Rafflecopter at this link!

There’s also another BONUS!  At least there is for you dear blog readers.

A special prize will be raffled off among anyone who comments on every single blog tour stop, so don’t miss a single fascinating installment!

And don’t forget to share on social media.  The hashtag we are using to promote the book is #trucksontour.  Every time you share a post on Face Book, Twitter or Instagram using #trucksontour you will get an entry into a raffle where 3 winners will each get a $25 Merritt Bookstore and Toystore gift card (which CAN be used online).

Isn’t that generous?  Thank you again Susanna for stopping by and including us in your blog tour.  If you’d like to read the other blogs, be sure to check out the tour graphic below.

13 thoughts on “Simply 7 interview (& GIVE AWAY!) with Susanna Leonard Hill–The Road that Trucks Built”