Today’s picture book is one I’ve been waiting to share with you and it is well worth the wait!  It is creative non-fiction told in an incredible second person point of view that helps the reader to dive into the text and participate right along with the deep-sea submersible ALVIN. 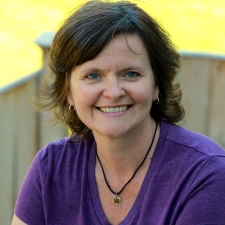 Today’s author, Michelle Cusolito, has been a part of the picture book community for quite a while.  That is how I got to know her before her debut picture book was released at the end of May.  She has been exploring natural places since she was a child growing up on a farm in Southeastern, Massachusetts. She has lived in the Philippines, where she first observed colorful fish in their native environment, and in Ireland, where she and her family hiked “The Burren,” an otherworldly landscape made of limestone. She has trekked to places such as Machu Picchu in Peru and the Sahara Desert in Morocco. She hopes readers will be inspired to explore their worlds. You can learn more about her at her website or follow her adventures on Instagram and Twitter.

“Flying Deep” is her debut picture book and the culmination of a dream that took years of work.  It shows the reader exactly what it is like to be inside of the ALVIN, what wonderful creatures of the deeps sea explorers might find, and the story doesn’t bore the reader for even a second of it!  THAT takes talent my friends!  And it has already started to get recognition for that.  The book has received a starred review in Kirkus, as well as being listed by The Washington Post as one of the Best New Books for Children!

Me: What draws you to writing picture books?

Michelle: I love the interplay between art and text. A true picture book requires both to work. While Flying Deep is a non-fiction picture book, the same applies. Without Nicole Wong’s gorgeous illustrations, the book does not fully make sense- readers would have no idea what Alvin or the deep ocean animals look like.

Me: The ALVIN is a fascinating subject to study and you’re obviously passionate about it. What was it that first sparked that fascination? What fanned the flame and kept it stoked as you pushed onward in your research (as it sounds like there was a ton of it) and continued to persevere with your manuscript?

Michelle: When I was teaching 4th grade, I met a former Alvin Pilot through a friend. I asked if he would be willing to visit my classroom to share pictures and stories of his work as a pilot. He kept my students and me mesmerized with stories of giant clams, tube worms as tall as a humans and black smokers spewing toxic chemicals.

I’m fascinated by the weird and unusual animals that populate our planet. Don’t get me wrong, I say “awwww” over pictures of cute little animals like chipmunks or koalas like everyone else, but I am most fascinated by strange creatures of the deep, dung beetles, and other animals that make most people say, “Eww!” (An aside… “Eww” was banned in my classroom when I taught 4th grade. I had a colleague who was squeamish. She learned to say, “Oh, that’s very interesting” when I had a praying mantis egg case hatch in my classroom or a ring-necked snake in our woodland terrarium). The fact that humans have been able to design a vehicle that takes us to inner space where we can see bioluminescent, alien-like animals is remarkable. I could research Alvin and the deep sea for the rest of my life and never be bored. 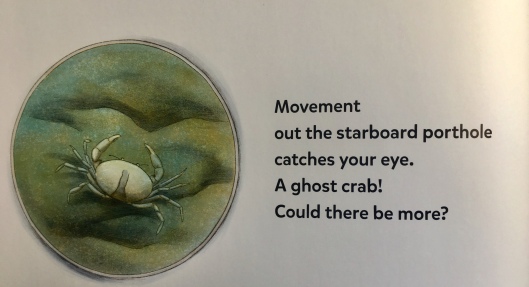 Me: The text of this story is riveting. What made you choose 2nd person point of view? That’s not very common in picture books. Was that the format from the very first draft of this manuscript?

I wrote about this on Beth Anderson’s blog, so I won’t repeat the whole story here. I will elaborate to say that, yes, it was written in second person from first line I ever wrote. I had been toying around with second person for a while and had written two other manuscripts in second person. I like the way second person places the child in the experience. The other two manuscripts were also non-fiction science pieces that have the child reader “driving” the exploration. It’s way to tap into the childhood sense of wonder I want to encourage.

I did not intend for Flying Deep to be written in second person, however. That’s the form the book wanted to take. (Hop over and read my post on Beth’s blog to read that story.)

Me: The illustrations in this book are wonderful and incredibly detailed. You did a lot of research and had the connections with those on the craft. Did you help Nicole Wong in any pictorial research for what the vessel looked like inside and outside? Or did she research on her own?

Michelle: Through my editor, I provided Nicole with images from when I visited Woods Hole Oceanographic Institution (WHOI) and climbed inside Alvin, but in truth, those images weren’t terribly helpful to her. I had visited when Alvin was undergoing maintenance so different sections were removed or under repair. Nicole is an amazing researcher and artist. All the credit goes to her for the incredibly detailed and accurate illustrations. (Check out this terrific post about Nicole’s research and illustration process to learn more.)

We also had the support of Bruce Strickrott, Alvin pilot and manager of the Alvin group at WHOI. He vetted both the text and the illustrations for us at several points along the way. (Of course, any errors that might remain are our responsibility).

Me: What is one thing that surprised you in writing this story?

Michelle: I didn’t realize how important music is to Alvin pilots and passengers. Don Collasius (former Alvin pilot) was the first person I interviewed. He mentioned that he used to play a Bruce Springsteen cassette when he piloted in the 80’s. I thought that was interesting, but I didn’t particularly think that detail would be in the book until Bruce also mentioned it. I realized it was a detail I needed to include.

Michelle: Reading must be a major part of your writing life. Read widely and focus on the craft of writing. Type up your favorite picture books in manuscript form and analyze how the author wrote the book. Consider point of view, structure, voice, plot, character, etc.

I often joke with my librarians that I keep their circulation numbers up. It’s a joke rooted in truth. I read hundreds of picture books a year and have at least a dozen I typed up as manuscripts.

You also need to be perseverant. This business is tough. I received my first “good” rejections (hand written notes from editors) more than a decade before Flying Deep came out. As of today, I have not sold a second manuscript, despite having had three different manuscripts go to acquisitions at three different houses. If this is something you really want, you need to be prepared to be in it for the long haul.

Me: What is your favorite moment or memory that happened in the process of birthing this book (a favorite research tidbit or moment; a favorite experience or encounter; or even a favorite post-publication fan encounter)?

Michelle: Oh, that’s easy. It has to be the day I got to climb inside Alvin and sit in the pilot’s seat. I was giddy!

I can only imagine!  Dear readers, if you haven’t yet had a chance to read this book, I can’t recommend it enough.  It’s a fantastic read, even if you’re not an avid ocean lover like I am.  This is a picture book that succeeds in more ways than one and is definitely one worthy of study!