I admit that I LOVE a good pun (thanks to my dad).  I may groan when my hubby tosses them out on a regular basis, but … deep down I love them.  And I laugh every time.  SO, when I heard that today’s book was as full of food puns as a refrigerator?  I HAD to do another Simply 7 interview.  You’ve been warned!  LOL!

Author Henry Herz has stopped by my blog a few times now to discuss other books of his.  I’m sad to say that the LA Conference was SUCH a whirlwind that I missed meeting him in person again.  BUT you can learn more about him at his website.

And I’m absolutely delighted that he has stopped by once again to discuss one of his latest books “Good Egg, Bad Apple.”  You can already tell from the title alone that this is going to be a fun book, can’t you?

Welcome back to my blog Henry!

Me: Some stories, like fruit, take time to ripen and fully develop. Was this one of those? Did this story need time to grow once the seed was planted?

Henry: I knew I wanted to write a book around food-based wordplay after I saw this refrigerator magnet.

I was excited, so the first draft came pretty quickly. But, like any story, this went through multiple revisions (about 15, if I recall correctly).

Me: I admit I love a good pun and this book is full of delicious food word play (idioms, puns, and even auditory jokes). Did you work those into the text after you had the story in place? Or was that where the idea germinated from?

Henry: Ha! My diabolical plan for world pun domination is working! You’re using food-based wordplay yourself. To answer your question, it was half & half. I knew that Bad Apple and Second Banana would be the villains, and that Good Egg would be the hero. I had the outline of a story, and then researched food-based idioms. I was amazed at how many there were. I intentionally overloaded the wordplay, and then removed those references that weren’t advancing the story.

Me: Egg is almost the only character that isn’t a fruit or vegetable in the story. Was that on purpose? Or did you intend to make him the cheese that stands alone?

Henry: You’re right. Good Egg is the only non-plant character with dialog. The Swiss Cheese remains silently neutral (some geopolitical humor for those of you playing at home) in the face of Bad Apple’s bullying. I made Good Egg the protagonist because he offered the most positive food idiom that could serve as a character name. But, I also like that he’s different from his friends.

Me: There is a theme of bullying hidden within this story and standing up to those that persecute you that gives the reader lots of food for thought. Is this an issue that you meant to address? Is it a personal topic for you? 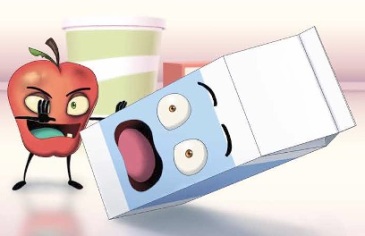 Henry: Yes, it was always my intention that dealing with bullies would be the theme of the story. I was bullied a little as a kid; nothing major. I’m pleased to say that my sons haven’t been bullied. But it is an important topic because many people do experience it. With my story, I tried to explore one motivation for bullying.

Me: I have to applaud you for not going with the typical violent solution to bullies either (i.e., “just hit back”). Egg doesn’t get boiling mad and lash out. Was this intentional as well? How did you come up with such a creative ending (no spoilers)?

Henry: Boiling mad? I see what you did there. Your support makes me glad I scrapped an earlier version in which Good Egg wields a ginsu knife to slice, dice, and julienne his way to domestic harmony. My intent was to show that different approaches may or may not work, depending on the bully and the situation. I wanted young readers to see the benefit of trying different non-violent tactics.

Me: You worked with illustrator Luke Graber on other projects like your upcoming “How the Squid Got Two Long Arms.” Did you two get along like peas in a pod and you just HAD to work together again? How did you end up working with him on two different books for two different publishers?

Henry: As you say, I’d worked with Luke before. He’s very easy to work with, and has a distinct comic book style that I think works really well for both books. It’s true that normally the publisher decides which illustrator to use. But Schiffer was open to suggestion, and they liked Luke’s style too.

Me: What is your favorite joke in this book? Were there any jokes that had to get left out or cut because they didn’t bear fruit?

Henry: I’d say “The vegetables were steamed” is my favorite joke because that was the genesis for the entire project. Technically, that sentence “tells” rather than “shows”, but it was just too good a line not to use. The double pun of Good Egg telling Sweet Potato to keep her eyes peeled is a close second for me.

Yes, there were quite a few jokes that ended up in the literary compost, like “You’re slow as molasses” and this exchange as Romaine comes to Good Egg’s defense:

“D’you want a piece of me?” Romaine bumped Bad Apple.

LOL!  I love it!  I’m a little bit sad that those didn’t make it in.  A good pun is hard to come by.  Thank you SO much Henry for this fabulous word play interview.  And dear readers, if you love a pun as much as I do, if you carrot all, then you have to look out for this book. 😉