If you’ve been a follower of my blog for any time now, you probably already know that I am a lover of the sea and all things in it.  I grew up on a small rainy island in the Southeast of Alaska and sought peace at the side of the shore many times, just sitting there for hours listening to the reassuring constant lap of the sea on the rocks and sand.  I don’t remember when I started swimming in the ocean, but I’ve always done so given a single opportunity and I suppose I will always continue to do so.  There is a quote

by Jacques Cousteau that speaks to the level of my obsession with the sea.

It’s SO true!  What does this have to do with another Simply 7 interview?  Well, today’s interview is one that makes me feel like a mermaid all over again.  Not only is this a fun picture book that is set in the ocean, but today’s interview is so chock full of wonderful ocean facts I can almost smell the brine of the sea.

Author Henry Herz has stopped by my blog a few times now to discuss other books of his.  In fact, this is his third book released within the last couple of months!  You can learn more about him at his website. 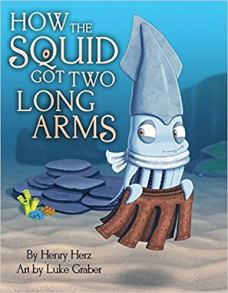 “How the Squid Got Two Long Arms” is a fun pourquoi tale.  A Pourquoi tale is a fictional story that explains why something is the way it is (and usually involves animals).  This is yet another form that Henry plays with in his latest book about a naughty squid who is prone to stealing what isn’t his.

Henry: Si si, senora, there are indeed plans for another picture book with Pelican. But they are around the dry (in both humor and environment) BUNNY WATSON AND SHERLOCK CHICK: THE POACHED EGG, which is scheduled for a Spring 2019 release. As you note, HOW THE SQUID GOT TWO LONG ARMS is my second silly cephalopod-centric story with Pelican. The first was LITTLE RED CUTTLEFISH. However, I did not propose a trilogy – that’s just how things worked out. I did submit to Pelican a picture book manuscript about a Leafy Seadragon. But apparently it didn’t cut the mustard (what an odd food idiom, by the way). Hmmm. Has anyone done a picture book about food idioms…

Me: LOL! I see what you did there! And it’s another tentacled sea creature! Do I sense a love of cephalopods in your background?

Cuttlefish can taste by touch, and have W-shaped pupils, three hearts, greenish-blue blood, and the largest brain-to-body size ratio of invertebrates. Cuttlefish are indeterminate growers – they NEVER STOP GROWING! The males have eight arms and the females have six. Like gorillas, a dominant male keeps a harem. Clever non-dominant cuttlefish males have been observed hiding their extra pair of arms to sneak in to the harem posing as a female! “Nothing to see here, boss… Hello, ladies.”

Me: LOL! That’s funny. In your dedication, you mention Rudyard Kipling. I’m assuming this is a reference to his “Just So Stories.” Is that where you got the idea for this story? Or was it a combination of things?

Henry: Kipling’s “Just So Stories” was indeed one of the inspirations for HOW THE SQUID GOT TWO LONG ARMS. For those not familiar, those are a compilation of whimsical fictional explanations for why many animals are the way they are, including: How the Whale Got His Throat, How the Camel Got His Hump, How the Rhinoceros Got His Skin, How the Leopard Got His Spots, and How the Elephant Got His Trunk.

I also applied alliteration and lyrical language in homage to Kipling’s style. Here’s his glorious opening for “How the Whale Got His Throat”:

“On the sea, once upon a time, O my Best Beloved, there was a Whale, and he ate fishes. He ate the starfish and the garfish, and the crab and the dab, and the plaice and the dace, and the skate and his mate, and the mackereel and the pickereel, and the really truly twirly-whirly eel. All the fishes he could find in all the sea he ate with his mouth—so! Till at last there was only one small fish left in all the sea, and he was a small ‘Stute Fish, and he swam a little behind the Whale’s right ear, so as to be out of harm’s way. Then the Whale stood up on his tail and said, ‘I’m hungry.’ And the small ‘Stute Fish said in a small ‘stute voice, ‘Noble and generous Cetacean, have you ever tasted Man?’”

Me: What is your favorite undersea discovery that you made while writing this book?

Henry: That “squid” is the singular and the plural. And that you don’t mess with squid. Mesonychoteuthis hamiltoni (the colossal squid) may grow to 46 ft. in length, making it the largest invertebrate. Squid also have the largest eyes in the animal kingdom.

Me: The illustrations in this book are fun! I even caught the allusion to Jon Klassen’s “This is Not my Hat” (and saw the sneaky little red cuttlefish hidden in there too). However, Luke Graber is not the same illustrator that worked on “Little Red Cuttlefish.” How did he come to be involved in this project? Did you get to interact with him at all during the process like you did with Kate Gotfredson?

Henry: You have correctly identified the second influence in the writing of SQUID. I liked THIS IS NOT MY HAT’s theme of “do unto others”, and I especially loved the irony of the unreliable narrator. To me, few things ring so true and are as funny as people’s ability to deceive themselves. BTW, here’s a priceless photo of me wearing a trapper cap (like the eel in SQUID) with Jon Klassen (far right) and others.

Yes, Luke Graber did a great job reading my art direction and taking it to the next level. I was able to view his work in progress and offer feedback. I thought it would be funny to have the protagonist from LITTLE RED CUTTLEFISH make a cameo appearance in SQUID, and Luke obliged. That’s also true of two of my other books. The imp in MONSTER GOOSE NURSERY RHYMES subsequently got his own book, WHEN YOU GIVE AN IMP A PENNY.

Me: With several picture books published now, what advice would you give to new picture book writers?

Henry: Hone your craft before rushing to submit to agents or editors (or to self-publish). Develop a thick skin, because the industry involves an enormous amount of rejection. And be persistent, because you’ll never get published if you quit before an editor falls in love with your manuscript. I have a full article on this subject.

Me: I remember discussing scuba diving when we talked about “Little Red Cuttlefish.” Have you ever seen a squid while scuba diving? If yes, did it ink? If no, is that also on your wishlist of sea creatures to see someday?

Henry: Speaking of ink, did you know that the reddish-brown sepia ink used in Greco-Roman writing came from cuttlefish? Cephalopoda is the taxonomy class that includes octopuses, squid, cuttlefish and nautiluses, and cuttlefish’s order is Sepiida.

I have never spied a silvery squid while scuba diving. That would certainly be a cool creature to encounter. I have been in the water with Black-tipped reef sharks, a Lemon shark, moray eels, and a sea lion. I’d say the top of my list would be to meet a wild dolphin or sea turtle.

This October, I’ll be reading SQUID and LITTLE RED CUTTLEFISH at the Scripps Birch Aquarium. I am looking forward to that! A list of my events can be viewed via my website.

Wow!  What a great opportunity!  I do love a good aquarium.  They are the best opportunities to see under the waves without actually swimming.  They are tiny windows into the mysterious world that covers 70% of our planet.  But I digress again!

Dear readers, if you haven’t yet had a chance to read this book, track it down.  It’s entertaining, to say the least.  =)