Today’s interview is intriguing.  Here is a picture book that could stand alone as a story, and maybe even have something to say about accepting others or dealing with change.  Yet there is also a subtle educational chord that is being played in the background of this musical story.  This is how you write a picture book with so many different layers! 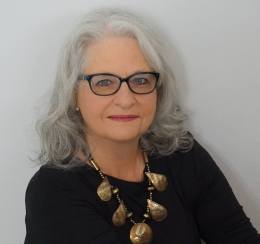 Sherry Howard lives in Middletown, Kentucky. During her career in education, she served as principal in one of the largest middle schools in the US. She now has picture books and chapter books being released from Clear Fork Publishing.  You can learn more about her at her website or on Twitter or Instagram.

Her debut picture book “Rock and Roll Woods” is a cute story about a bear named  Kuda who becomes a bit grumpy on hearing his normally quiet spring woods now beating with a new rhythm.

Thanks for having me, Jena! It’s great to answer questions that might encourage another writer on the journey!

Me: You have been an educator, a principal, and a special education administrator. That is quite the background! What is it then, that draws you to writing picture books?

Sherry: It feels like the natural transition for me to move from educator to writer! I volunteered in schools for a while, following an early retirement after an injury. I missed the kids so much! Writing was a great way to stay in the world of children, and maybe give something back to them in a different way.

Me: Your educational background seems to also have inspired this story with a theme of sensory integration. Which came first: the story of a bear in noisy woods, or the topic of autism?

Sherry: I don’t think I can separate the two. As soon as Kuda was “born” to me, he was a special bear. A very likable special needs bear! Kuda’s emotional core comes from my experiences with one particular lovable, grumpy child I had the privilege of having in my life. 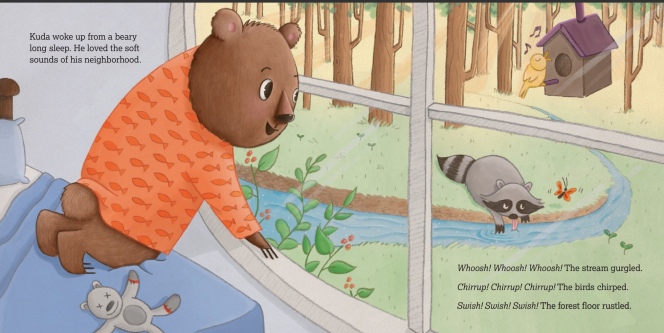 Me: Is Autism a personal topic for you? Did you set out to write a story about a character that struggles with it? How did you weave it into this story without it getting preachy?

Sherry: I was very careful with the story to make it universal, accessible and fun for ALL kids, and not preachy. The most important thing to me was having a fun story. That definitely drove the writing. The back matter was just a bonus! I didn’t think of Kuda as having autism, but as listening to the beat of his own drummer, literally. So, I didn’t deliberately weave it in—it was part and parcel of the story of Kuda. Kuda is very real to me as a character!

So many children fall outside of the narrow norms we use, and I actually hate labels altogether. In my professional life, I avoided labels whenever possible. Autism is personal to me because people I’ve loved, both professionally and personally, have been on the spectrum. I was an advocate for special needs children and young adults for many years through the Council for Exceptional Children, a wonderful advocacy organization.

Sensory Integration problems aren’t limited to children on the autism spectrum. A surprising amount of children have them, my daughter included. When I asked 150 first graders at my book birthday party who was afraid of loud noises, well over half of them shot their hands right up.

I think most good books do that: reach kids at different levels. Some children may just enjoy the story for itself, some may identify with a character, and some may wish to BE a character.

Me: You use a lot of wonderful onomatopoeia in this story. Was that always there from the very first draft? Or did it get added in later? What made you decide to use that repetition of “Boom Whappa Whappa”?

Sherry: I’m a poet. So, poetic technique is part of all of my writing.

I think all of the onomatopoeia stayed from the first draft. I’d have to check to be sure, but I think so. Give me a second. Okay, back. On 11/17/16, I sent an early draft to a critique partner. All that onomatopoeia, and more, existed from the start. Almost two years later, that book is now on the shelves, onomatopoeia and all!

Me: Anika A. Wolf’s illustrations in this book are delightful and perfect for this story. Were there any illustration surprises for you?

Sherry: It was all a total surprise! I didn’t see it while in progress, just a tiny peek. The first thing I saw was an image of Kuda on the drums, and I was immediately in love. The cover was the last to be completed, and I was dying to get it. I think it’s gorgeous. I could never have imagined the woods as beautiful as illustrator Anika A. Wolf, and art director and editor Mira Reisberg made them!

Me: Any advice for other picture book writers?

Sherry: I think the only advice I have is keep going. If you write only to be published, you may be disappointed. But, if you study the craft, and write because you love to write, you can’t lose. Take as many classes as you can afford. There are wonderful ones out there. Exchange work with people whose opinions you value. Stay involved on social media and locally with children’s authors. I actually met my (now) friend and publisher, Callie Metler-Smith, on Facebook. We bonded over a shared concern for autism advocacy. I sent her a different book first, which she turned down. Then I sent Rock and Roll Woods, which suited her plans (actually, I think she loved it!) and she offered a contract.

Me: Do you have any other book projects on the horizon? What comes next for you?

Sherry: I have some books coming from Spork, although I don’t have exact dates yet. ROCK AND ROLL WOODS will have a sequel in 2019, and I have a chapter book coming soon. I also have a number of work-for-hire projects expected to release in 2019. I’m still querying, hoping to snag an agent some day. I have also written a middle grade and a young adult, both contemporary novels. And I have too many picture books to count in some stage of writing or querying. I easily move from project to project, depending on deadlines and mood. I like to stay busy!

Wow it sounds like it!  Thank you for taking the time to stop by Sherry.  Dear readers, if you haven’t yet had a chance to read this book, I recommend tracking it down.  It’s a fun read with all that onomatopoeia.