Today brings another first.  This is the seventh Simply 7 I have done with Josh Funk!

Josh is on a great blog tour and I’m participating in it.  If today’s post leaves you hungry to learn more about this fun picture book, be sure to check out the other blogs on the tour! 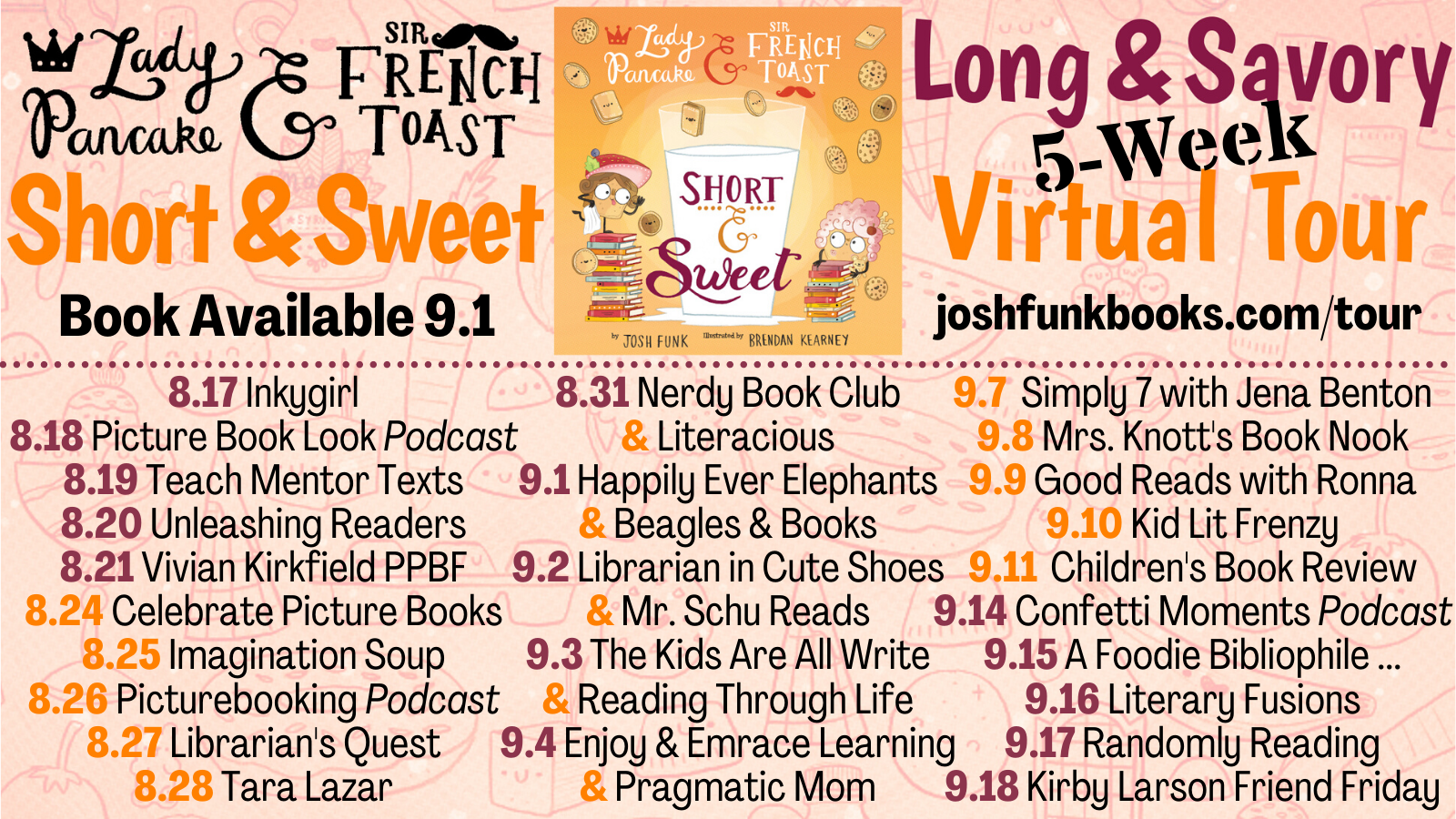 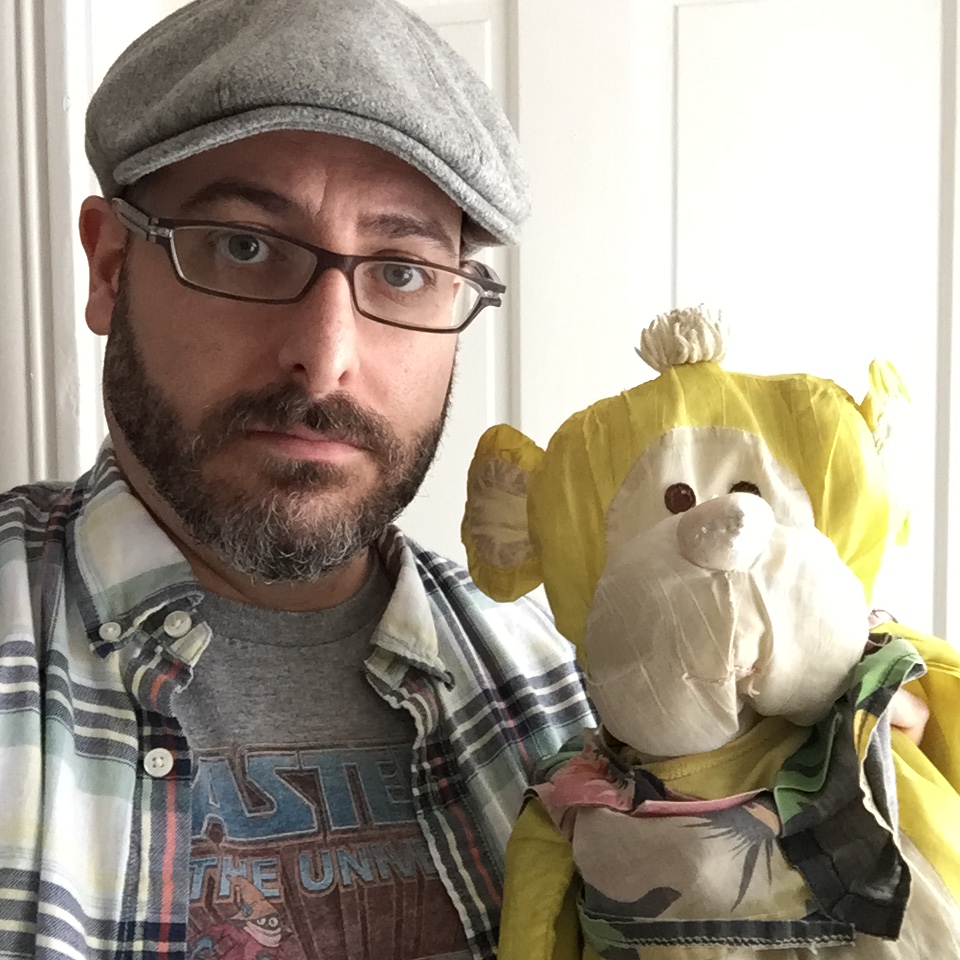 Josh Funk has been a frequent visitor to my blog.  His very first visit to my blog was back in 2016 for one of his first picture books “Pirasaurs!”  Since then he has written and published more picture books than I can now keep track of!  Yet each visit has been a delight.  You can learn more about him at his website. 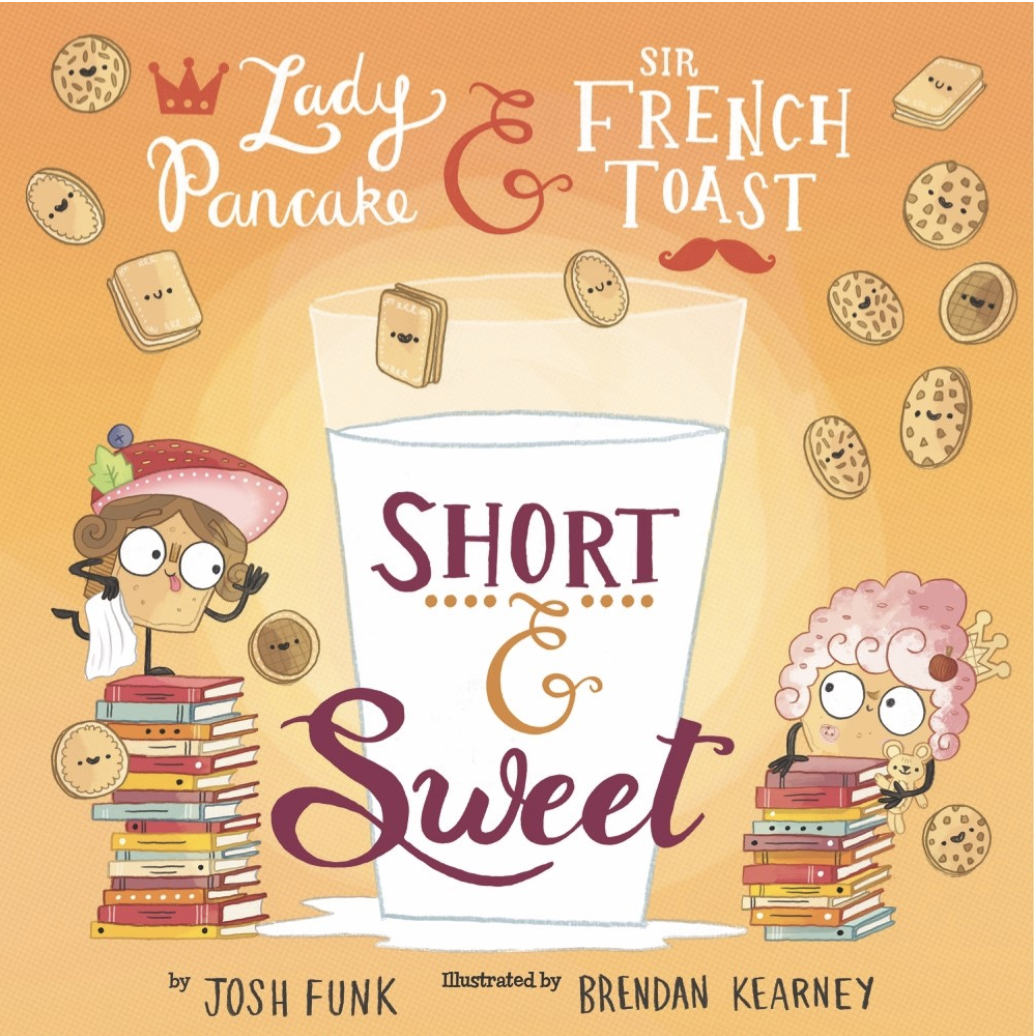 “Lady Pancake & Sir French Toast: Short and Sweet” is the fourth book in the wonderful picture book series about life in the fridge.  This latest installment may be my favorite book in the series yet.  I mean, I love each and every single one of them, and always think “there’s no way the series can get better than this!  This is probably the last book in the series.” And then another comes out that’s even better!

In the story, the two main characters are getting a little old and that is never a good thing for food.  Some might even think, reading about these characters is getting a little old, but hold onto your hats.  That is SO not the case.  Instead, Lady and Sir must find a solution to freshen up and … well, I don’t want to spoil the plot.  Let’s just say that they succeed a little TOO well in their search for youth. 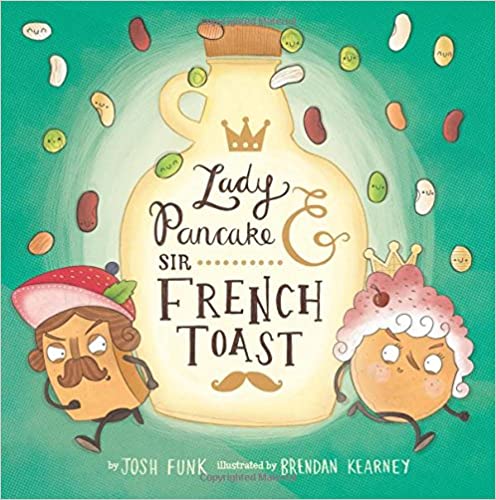 Josh: At first, I never imagined any of my stories would become ‘series’ – it’s incredibly challenging just to publish a book period, let alone expect sequels. And this is especially important when you’re starting out because if you’re trying to sign with an agent, the agent is going to want to see multiple picture book manuscripts and they CAN’T be sequels of each other (because if the agent can’t sell book #1, they won’t be able to sell book #2). I’m not saying it hurts to have ideas for a series or ‘series potential,’ but you can’t ever really assume that’ll be the case. 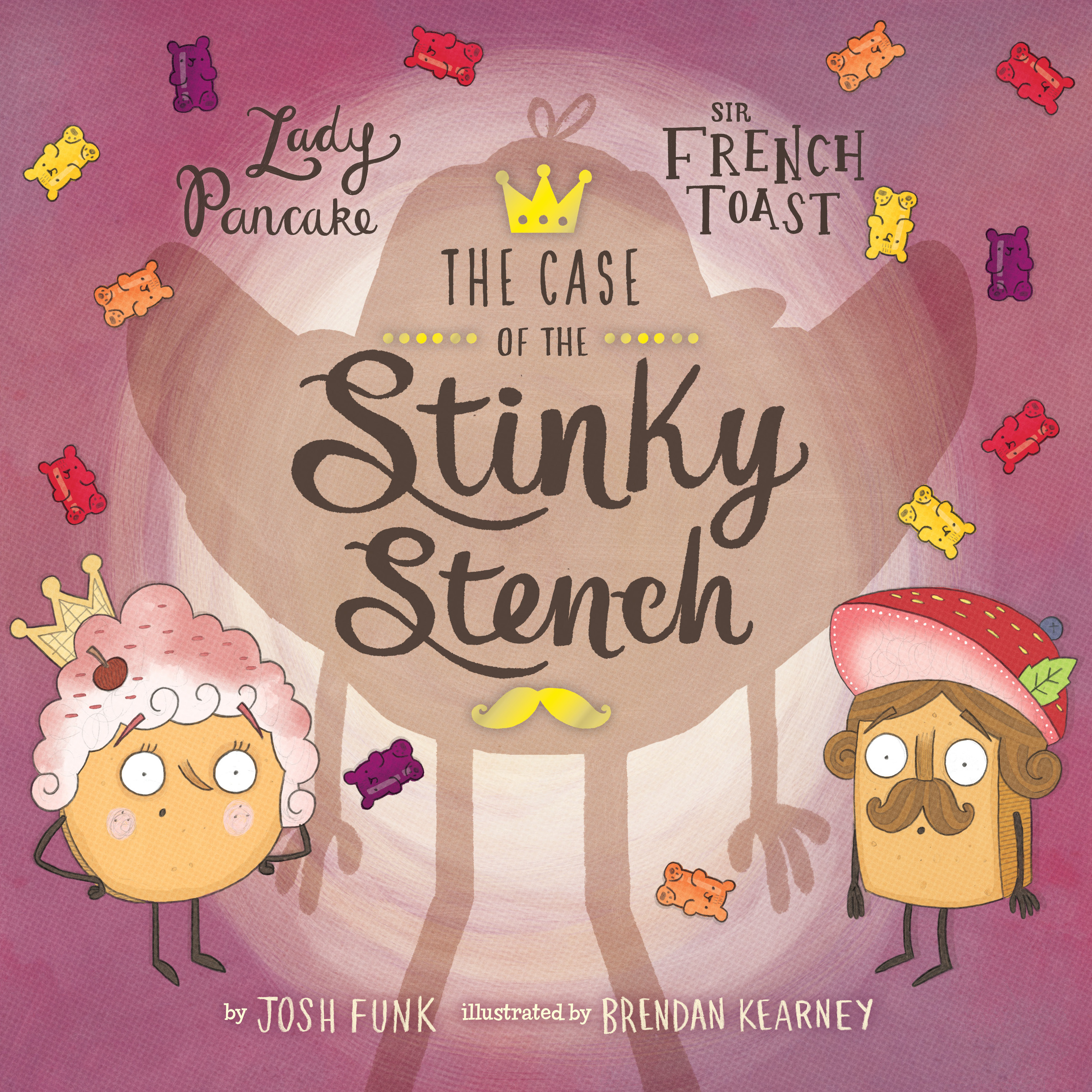 However, as soon as I saw Brendan Kearney’s first round of sketches of the original Lady Pancake & Sir French Toast, I knew I had to explore more in the fridge. And I’ve been fortunate that Sterling’s been interested in publishing more stories about this duo.

As far as what I like more, that’s a great question. There are aspects to both I like. When writing a sequel, there’s usually a built-in pacing that I can use as a guide. For example, in all the food books, there’s an opening spread setting the scene, followed by a new character being introduced. There’s always a gatefold at the end following a wordless spread of all the characters having a party, following the resolution. The familiar structure definitely helps. 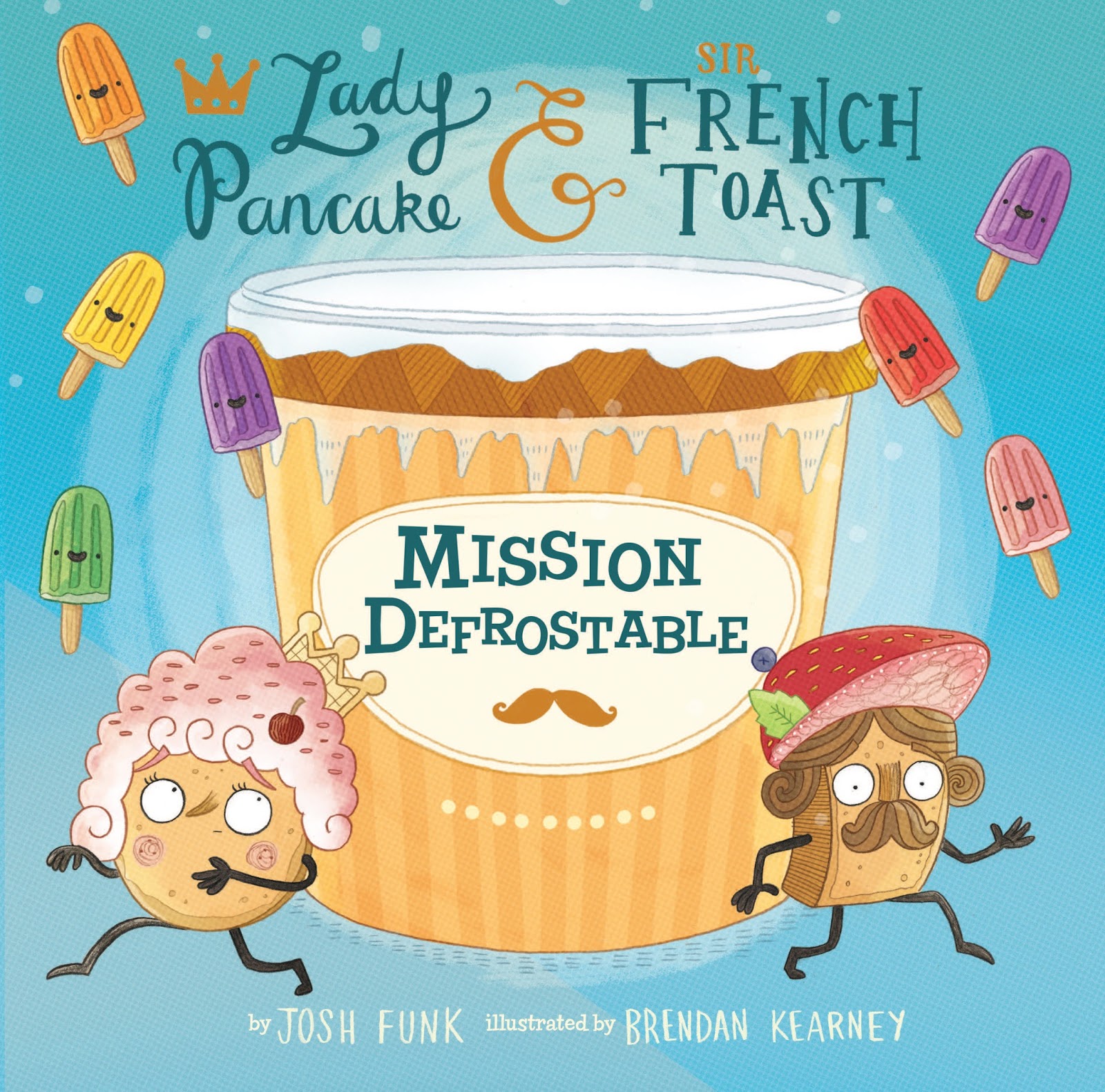 But writing new stories is fun, too. I can experiment with different formats, different rhyme schemes, and new characters. While I can’t talk about them, I do have a few new stories that are departures (in some ways) for me that I’m excited about.

So the answer is both? Or I don’t know yet? Ask me again in a few years.

Me: I think the Lady Pancake & Sir French Toast series is my favorite of your books.  Maybe.  Each time I think “how can he top the last one” and then you do!  I laughed so hard at Short & Sweet from the very first page.  Of course the characters are worried they’re getting stale after four books!  What gave you the idea for this latest story?

Josh: A couple things inspired this one. First, when the first Lady Pancake & Sir French Toast launched, my daughter (10 at the time) made me a really cool drawing of the two main characters as children and named them “Princess Pancake” and “Squire French Toast” – and I always thought that seeing them as youngsters would be super fun. In fact, the original title of Short & Sweet was “Mini Miss Pancake & Squire French Toast” – and it was also a line in the story that has since been cut. (Sales & Marketing thought that Mini Miss … was too long, especially since the series name, Lady Pancake & Sir French Toast, is so long already)

The other inspiration came from children’s questions. Over the years, kids had asked why Lady Pancake and Sir French Toast hadn’t gone stale themselves. And they had a point. The fruitcake in The Case of The Stinky Stench had gone stale after 8 months. And as we found out in Mission Defrostable, Agent Asparagus got split from her bunch during book #1 and described it as ‘ages ago’ AND she was a child at the time (according to the pictures). So how were these two leftover foods staying fresh for so long? In Short & Sweet, I decided to address this issue (they aren’t).

Me: The last time we talked about this series, you mentioned that each book in the series is a new genre.  I think you predicted that this book might be a sci-fi/comedy.  Do you think you succeeded?  If not, what genre do you think this book fits into?

Josh: At first I thought of this as a sci-fi/comedy, like The Absent-Minded Professor or Honey, I Shrunk the Kids. And to a degree, I still do. But I also think it fits into the ‘magical body-swap’ genre, sort of like Big or Freaky Friday where characters become different versions of themselves. So maybe it’s a ‘magical sci-fi body-swap comedy’?

Me: LOL!  That’s perfect.  I always love the new additions in each book to the universe.  I cracked up over Limes Square.  Genius!  But even more fun were the book titles the main characters were reading in the library.  Did you have any art notes on those or was that all Brendan Kearney’s work?  Did you have any favorites among those titles?

On the back of the first pair of cards I was trying think of ‘stats’ or ‘info’ I could add and since they’re in a book, I figured I’d add favorite book. Here’s what they looked like. 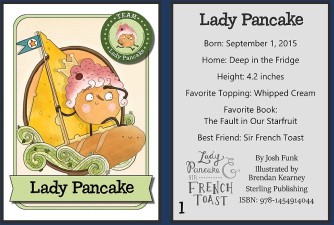 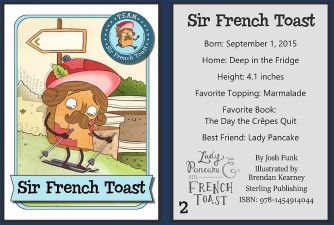 And I kept doing it for each book on more cards with more characters (see here on my Stuff for Kids page) and I just kind of went nuts with it in the library scene. 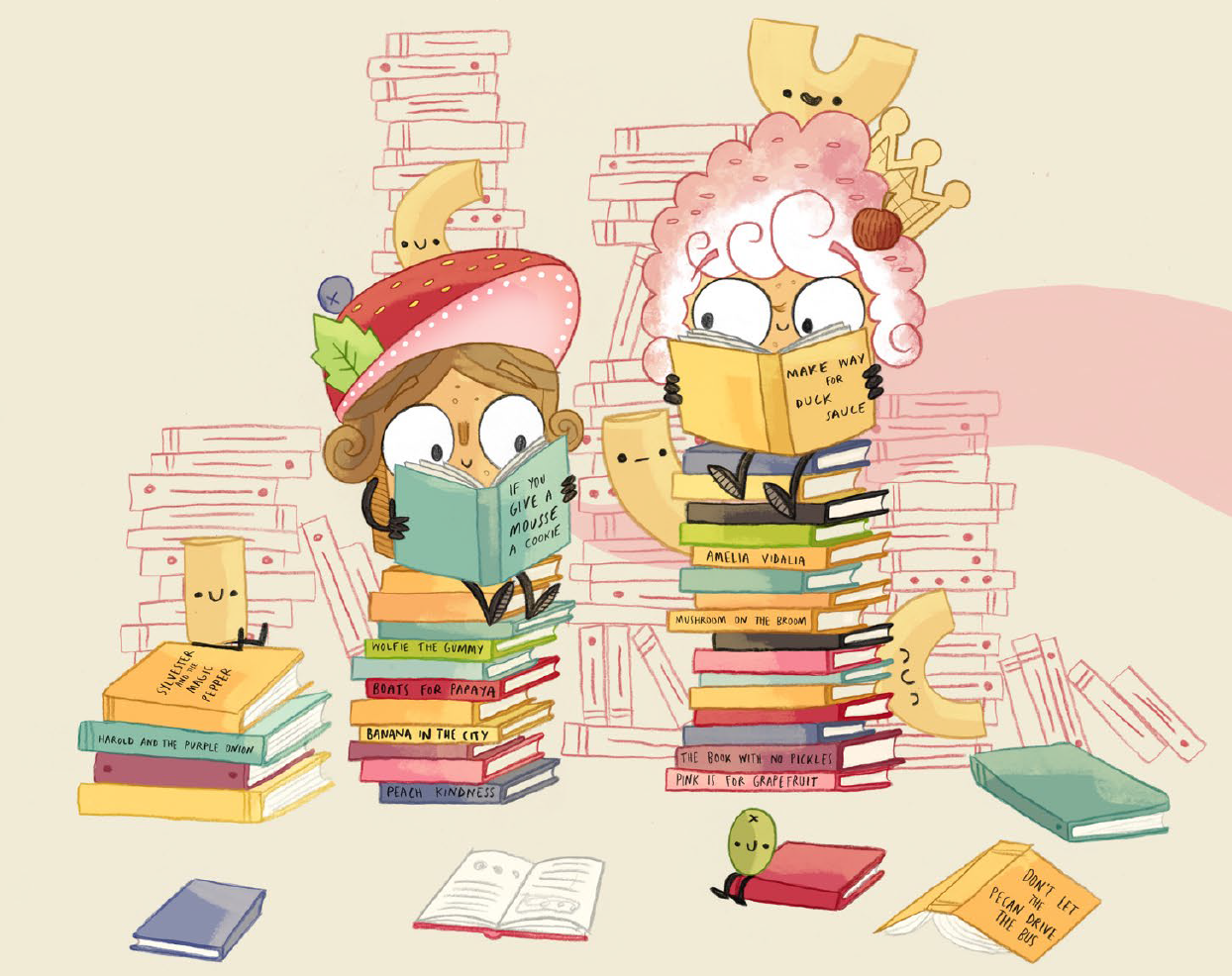 I think my favorite title might be Don’t Let the Pecan Drive the Bus, but my favorite book would probably be Boats for Papaya (which I considered calling Oats for Papa, but that sounded like a book about a goat or something).

Me: LOL!  I love that.  And those collector cards are among my favorite book swag.  I do love all the fun food puns that get squeezed into this series.  I love how your work AND Brendan’s work are full of them.  There is even a brand new musician that appears in this book!  What is your favorite illustration surprise in this book?

Josh: Yeah, all the musicians are Brendan. He’s great at the band puns. He’s always posting fun stuff on Instagram like that. 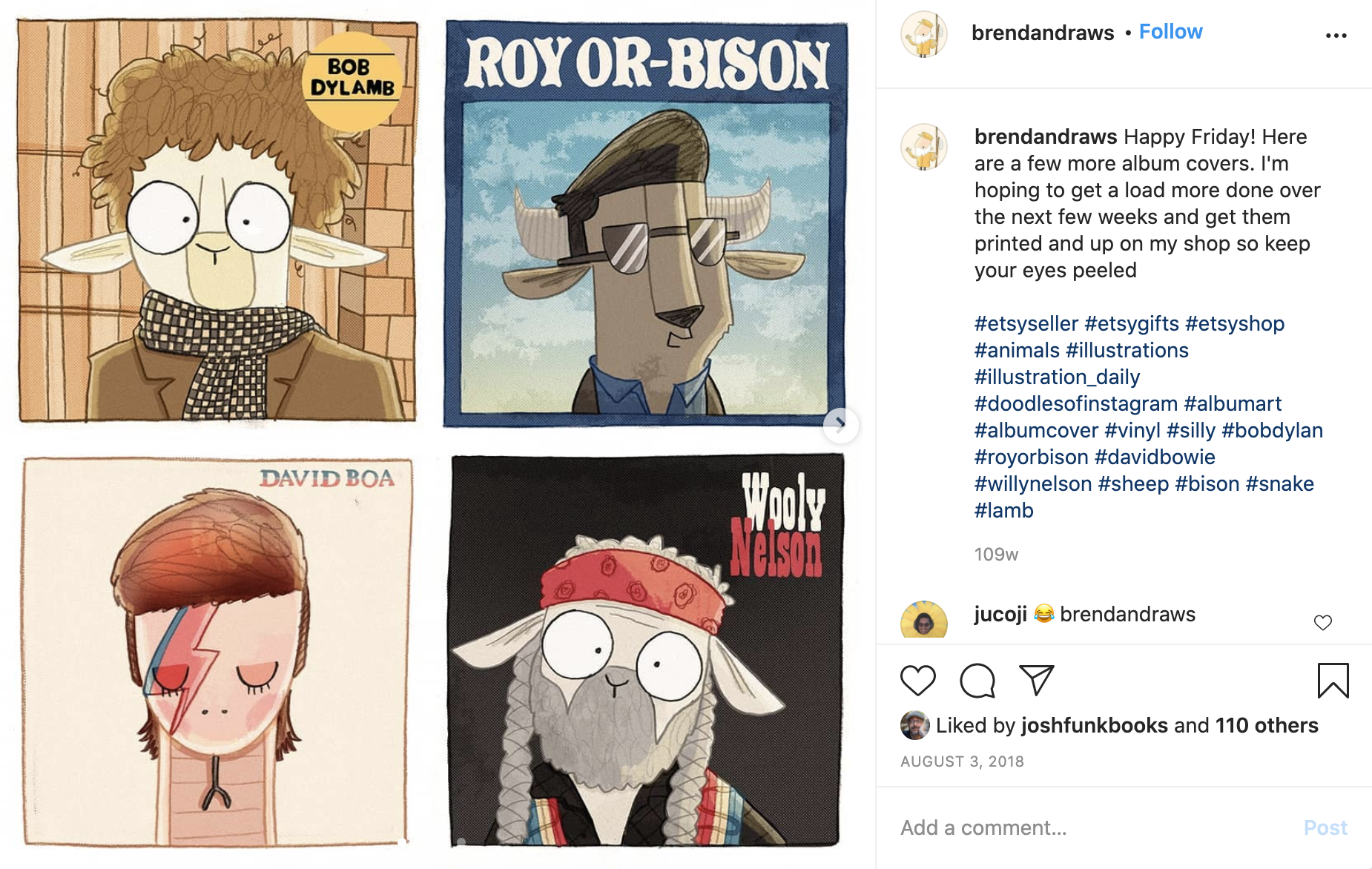 I think my favorite part of the art is how adorable Mini Miss Pancake and Squire French Toast are, especially along with the teddy bear and blankie that they have. And the syrup baby bottles at the end. So cute!

Me: Right?? Adorable! If you were a food character, which one would you be and why?  Have you already included yourself as a food character in this series?  Any intentions to do so?

Josh: I am and have always been Baron von Waffle. Bwahahaha!

Me: LOL!  Of course!  I should’ve seen that one coming! I have to ask the dreaded question again. Do you foresee any more adventures in the fridge with these characters or are you happy with this one as a finale for the series?

Josh: I’d love to do more! Maybe next will be a horror ‘cabin in the woods’ style picnic adventure? Or perhaps a cutlery alien-invasion? Or maybe a musical spinoff with Spuddy Holly, Juice Springsteen, and The Peach Boys? I’ll be sure to shout if it happens.

A musical!!  LOL!  Maybe it’s a rock concert that brings all the bands together to raise funds for a good cause. That would be brilliant.  I love Brendan’s musical spoofs.

Dear readers, if you haven’t yet read this book, you MUST track it down.  It’s a great addition to the series and a rollicking good time (for adults and kids alike).  It’s quite the rare picture book that can throw in science-fiction body-swapping humor, after all.