I’ve been down a lot the last couple of weeks.  Perhaps I was just staving off the inevitable and it’s my turn to be depressed in this pandemic.  I don’t know, but here I am.  Yet there are these moments of pure joy that help me to forget, just for a few minutes, the gloom around me.  I marvel at the carefree birds who fly from season to season unaware of my travails.  I marvel at the endless joy found in a child’s laugh.  And I marvel at the glow of a good book.  Today, I get to share that last bit with you. 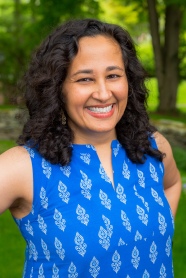 Rajani Larocca was born in India, raised in Kentucky, and now lives in the Boston area with her wonderful family and impossibly cute dog. A graduate of Harvard College and Harvard Medical School, she spends her time writing novels and picture books when she’s not practicing medicine. Her middle grade debut, Midsummer’s Mayhem (Yellow Jacket/Little Bee Books, 2019), an Indian-American mashup of A Midsummer Night’s Dream and competitive baking, was an Indies Introduce selection, an Indie Next pick, a Kirkus Best Middle Grade Book of 2019, and a 2020 Massachusetts Book Award Honor title. Her debut picture book, Seven Golden Rings: A Tale of Music and Math (Lee & Low Books, October 2020) is set in ancient India and involves a math puzzle and an explanation of binary numbers, and has earned starred reviews from Booklist and Publishers Weekly. You can learn more about her at her website or follow her on Twitter and Instagram. 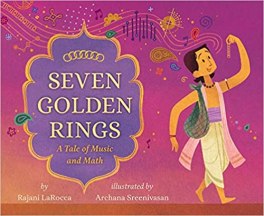 “Seven Golden Rings: a Tale of Music & Math” is an incredibly clever way to teach kids about math without boring them to tears.  Why?  Because, despite the subtitle, the math is hidden within a very clever story.  Young Bhagat has a dream and risks everything to see it accomplished.  I loved Bhagat and related to his journey, but he also has to solve a very difficult riddle in order to help his dream come true.  This is a book that will captivate listeners, just like Dan Brown’s “the Da Vinci Code” first captivated readers.  It’s a puzzle that you try to solve right along with the main character as you get sucked into his story.  It is simply mystifying how Rajani accomplished all of this in a PICTURE book!

Me: You have written at least two middle grade novels.  What is it then that drew you to writing a picture book?

Rajani: When I started writing for children several years ago, I never intended to write picture books. But then I took a kidlit “survey” class covering picture books through YA. And it opened my eyes to the miracle of telling a story with very few words, and the incredible storytelling that happens through a combination of words and pictures. And then I was hooked! I wrote my very first picture book draft during that class, and I never stopped.

Me: I love that.  You mention on your website that you love “realistic fiction with puzzles or riddles.”  Is that what helped you to create this story?  What gave you this idea?

Rajani: I have always loved puzzles and riddles. When I was a kid, I had fun trying to solve  them on my own and with my cousins when I visited them in India. And when my own kids were little, we often spent car rides telling each other riddles. In my house, we fight over who gets to take the logic puzzle book on the airplane! =) 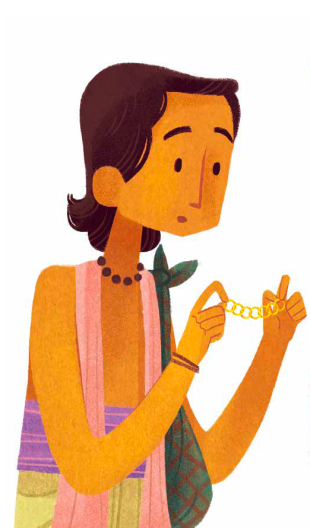 For this book, I took a logic puzzle I’d heard when I was a kid in India and changed it into something more complicated. And then I dreamed up a character who had to solve this puzzle because it was important to him and his family. It was only through working on the story that I realized the solution to the puzzle had to do with binary numbers.

Me: The back matter of this book talks about some very complicated math systems to explain Bhagat’s (i.e., the main character) puzzle.  Did you have to research this information?  Or did your medical background help you with this information?

Rajani: I already had an understanding of binary numbers. But the real challenge was to make the author’s note comprehensible to readers who may not be familiar with this concept and link binary numbers to both the solution to Bhagat’s math puzzle and how binary is used in computers today. I worked really hard on the author’s note in particular with my editor, Cheryl Klein, and we went through several rounds of edits on this part of the book.

Me:  And it shows!  The illustrations in this book are wonderful.  Did you communicate with the illustrator, Archana Sreenivasan, about her work at all?  Were there any illustration surprises for you?

Rajani: I didn’t communicate with Archana directly about the illustrations until after the book was done—and that was to express how much I adore them! Through my publisher, I got to see and give feedback at earlier points, starting with character sketches, then scene sketches and the cover.

Since this is my first picture book, everything was a surprise—especially how Archana could take a few words and create an entire world out of them. Bhagat and his mother have a home, complete with a pet, that we get to see at the beginning and the end of this book. And the rajah’s kingdom comes to life and transforms as well. Archana understood so much about the setting and cultural context of this story without my needing to explain any of it.

The process of making this book showed me in real time the magic that happens when words are paired with pictures. The beautiful final book is the product of so many people’s efforts: the author and illustrator, of course, but also the editorial and art teams. I’m so honored to be a part of it.

Me: What is one thing that surprised you in writing this story?

Rajani: This was one of the first picture books I ever wrote, and it took me nearly 70 drafts before it was acquired by a publisher! But when I look back on my very first draft, written in October 2013, the heart of the story is very much the same. It has always been about a young man in ancient India who loves music and math and who uses his skills to help save his family. So I guess the biggest surprise is that despite the number of times the story changed, the most important parts stayed the same.

Rajani: Please see above: this book was acquired in 2018, after nearly 70 drafts over 5 years! Persistence, humility, and a willingness to learn more and develop your craft is essential. It’s also important to identify the heart of your story, what it’s really about, and not compromise on that.

Me: Can you tell us about any future book projects you might have coming out? 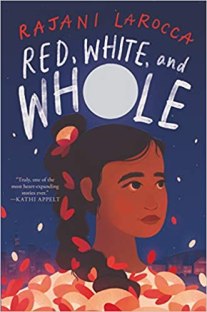 On Feb 2, 2021, my next middle grade, a novel in verse called RED, WHITE, AND WHOLE, will publish with Quill Tree Books/HarperCollins. It’s set in 1983 and is about Reha, the 13-year-old daughter of Indian immigrants who feels torn between the worlds of her parents and their community and her school friends and 1980s pop culture. Then her mother falls ill, and she’s torn in a different way. It’s a story involving immigration and assimilation, Hindu mythology and 80s music, science and poetry, holding on and letting go. 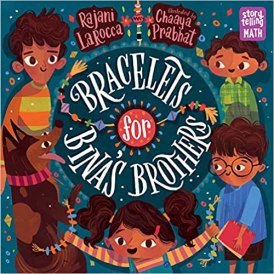 On April 20, my next picture book, BRACELETS FOR BINA’S BROTHERS, beautifully illustrated by Chaaya Prabhat, will publish with Charlesbridge. This is a story about a little girl who wants to make each of her three older brothers a special bracelet for the Indian holiday Raksha Bandhan. It involves some very early math: pattern making.

On June 1, Yellow Jacket/Little Bee Books will publish MUCH ADO ABOUT BASEBALL, which is a middle grade companion novel to my debut, MIDSUMMER’S MAYHEM. It involves girl and boy math competition rivals who end up on the same summer baseball team and can’t stand each other but need to find a way to work together for the good of the team. It involves magical math puzzles, baseball rivalry, and plenty of savory snacks.

In September, Little Bee Books will publish THE SECRET CODE INSIDE YOU, a rhyming nonfiction picture book that explains the basics of DNA to young readers, and also touches on the limits of genes and how our choices also determine who we are.

And Abrams will publish my picture book WHERE THREE OCEANS MEET, gorgeously illustrated by Archana Sreenivasan, in late 2021. It’s a story about a girl who travels with her mother and grandmother to the very tip of India, and the strength and love that mothers pass to their daughters across distance and time.

Holy buckets! That’s amazing!  I can’t believe you have five books coming out so soon.  I look forward to reading them.

Dear readers, if you haven’t had a chance yet to track this book down, I highly recommend it.  It’s a picture book unlike any other out there in the market today.  It’s a story of one boy’s dream, a riddle, and an ancient land that will draw readers into its timelessness.  This is one you won’t want to miss!

2 thoughts on “Simply 7 with Rajani Larocca–“Seven Golden Rings: a Tale of Music & Math””