I love sea turtles.  LOVE them!  I’ve seen them on the beaches in Hawaii and long to see one while swimming in the ocean one day.  I’ve read about them with my class and learned about more about them since seeing them in person.

I was recently quite alarmed to hear about over 5,000 sea turtles that had been cold stunned around South Padre Island, Texas during that cold storm Texas experienced last month.  That was something I had never considered as a cause for alarm before.  I admit that I don’t think of Texas and sea turtles together.  However, thanks to the rescue efforts of Sea Turtle, Inc. they were able to return 2,200 turtles back to the sea already.

Did you know that there are only 7 types of sea turtles in the world and many of those species are endangered?  Hearing that 5,000 sea turtles almost died just about made my heart stop.  Then this book came across my radar and I knew I had to share it with you. 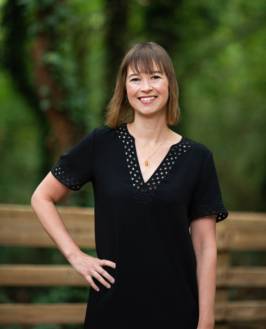 Kelly Jordan is a children’s author represented by Stephanie Fretwell-Hill of Red Fox Literary. She is a member of SCBWI and is actively involved in the Atlanta writing community. A lifelong lover of words, Jordan’s nonfiction articles have appeared in such publications as Atlanta magazine, Georgia Travel Guide, Redbook, Southern Living, Paste, Darling, and Flavors. Jordan is a Gulf Coast native and a graduate of the University of Georgia’s Grady College of Journalism. She is currently enrolled in Purdue University’s online Master of Science in Communication program. She lives in Decatur, Georgia, with her husband, son, cat, and dog.  You can learn more about her at her website. 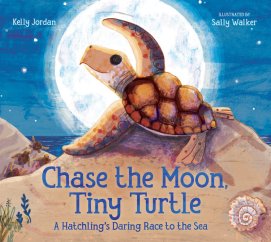 “Chase the Moon, Tiny Turtle” is a lyrical nonfiction picture book about the journey baby sea turtles take after hatching and the dangers they must survive before they reach the ocean.  That’s right, you heard me, LYRICAL!  This book is gorgeously written with the sparsest of language that sings on every page.  Plus, the illustrations are absolutely stunning.  If you too are a fan of sea turtles, then this is a book you will NOT want to miss.

Me: This is your second book with Page Street Kids.  How did you manage to get two great stories published with them?  Can you tell us about your book journey?

Kelly: Thank you so much for featuring me! I’m so excited about this book’s release and am thrilled to share a bit about Chase the Moon, Tiny Turtle.

This book’s journey is a fairly short and uneventful one! In my contract for The Little Blue Cottage (which came out May 12, 2020), Page Street Kids got first dibs on my next book. Stephanie (my agent) and I both felt that my manuscript for Chase the Moon, Tiny Turtle was a good fit for them. We were right!

Me: Wow!  That’s great.  I’ve seen several books about sea turtles, but never one written with such a beautiful lyrical text.  Was it like this from the first draft?  How many revisions did it undergo?

Kelly: I appreciate you saying that, Jena. This story kind of just arrived like this. Unlike The Little Blue Cottage (which went through over 25 revisions), this one only went through four revisions or so, which is unusual for me. Most of the revisions for this story were small tweaks to try to get the rhythm and language just right. From the beginning, I wanted this story to have a musical, magical quality to it that could potentially capture how I felt when I saw hatchlings make this journey several years ago in Mexico.

Me: Again, wow!  A gift from the Muse!  Your ability to break this story down into such simple beautiful phrases is astonishing.  What made you decide to approach the nonfiction material in this book in rhyme?

Kelly: Thank you! I honestly don’t think it was a conscious decision. I sat down and it just poured out of me and happened to rhyme. I felt that a story with minimal text was fitting for the sense of wonder I hoped to convey, and that it could potentially open up the possibilities for the illustrator. Fortunately for me,  Sally Walker signed on to illustrate this book. She blew me away with how gorgeous this turned out.

Me: Definitely gorgeous!  How much research did you need to do in order to write this book? What was one of your favorite facts that you learned about sea turtles?

Kelly: This story was inspired by a visit to the Georgia Sea Turtle Center, where I read about loggerheads—as well as other species—and heard a talk from one of the site’s experts, who shared a ton of turtle facts. When I got home, I checked out several books from the library and read as many turtle websites as I could find.

I learned so many interesting things about sea turtles, but one of my favorite facts to discover was that a hatchling’s sex is dependent on the temperature of the surrounding sand where turtles hatch. Warmer temps lead to female turtles, cooler temps lead to male hatchlings.

My hope is that kids will be inspired to learn about sea turtles as they read this book, and that it motivates them to recycle, watch their environmental footprint, and do what they can to protect the world around them.

Me: The illustrations by Sally Walker are beautiful works of art. Their layout and design in the book are beautifully done.  Did you see any of the work as it was being developed?  Were there any illustration surprises for you?

Kelly: I did see several of Sally’s sketches as she developed the book and had no changes to them. I’m a big fan of hers! I wouldn’t say there were any surprises. I love her use of color and think that our two art forms work really well together in this.

Me: Absolutely!  Any advice for other picture book writers or poets?

Kelly: I’m repeating what everyone says, but only because it’s so true! Practice. Read a lot. Get critique partners you trust, share your work with them, and do the work to revise. Go for walks. Carry a notebook everywhere you go. Write a lot of bad stories.

Me: Great advice.  I have seen sea turtles in Hawaii.  You have seen them in Mexico.  Are there any closer to where you live?  Have you ever swum with sea turtles before?  What personal connection do you have with them?

Kelly: I’m not sure where the closest loggerheads to me would be. Maybe the Golden Isles, which is the area I visited when I went to the Georgia Sea Turtle Center (Jekyll Island). This story was inspired by that trip to Jekyll Island, but also by my honeymoon to Akumal, Mexico, back in 2013. While we were there, my husband and I saw dozens of hatchlings pushing through the sand and heading to sea. We also got the chance to see massive mama turtles laying eggs in the wild. It was one of the coolest things I’ve ever seen! We went swimming at the beach there and saw turtles in the water with us. It was unexpected, but welcomed!

Wow!  How awesome!  I’ve only seen turtles laying eggs on film, oddly enough in an old episode of Reading Rainbow!  Thank you for stopping by Kelly.