Today I get to introduce you to a picture book author-illustrator from France!

Benjamin Flouw is an artist based in Marseille. Because of all the wildlife documentary he watched as a kid and the botany books he now reads as an adult, he is very concerned by all the environmental issues we are facing. He therefore assumes it might be nice to fill the world with pictures of animals, plants and landscapes, just in case those things won’t exist anymore in the future. His style is a clever mix of flat colorful geometric shapes, textures, patterns and dramatic lighting. He loves working on commercial and editorial illustrations, books and poster projects. You can learn more about him at his website or follow him on Instagram. 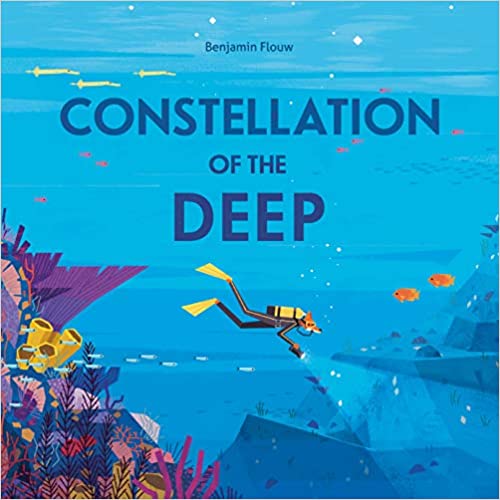 “Constellation of the Deep” is the second picture book he has published with Tundra Books.  His first book, “The Golden Glow,” introduced a character named Fox who was so in love with plants that he went hiking up a mountain to find a rare plant called the golden glow.  This second book has a similar premise.  We continue along on the journey with Fox exploring nature, this time in the ocean.

First, let me just express my love of foxes.  I’m obsessed with them and I can’t really tell you why.  I’d heard of the first book a few years back and had to track it down.  It was fascinating in its detailed exploration of the natural world.  Put a fox in the ocean exploring nature?  That’s TWO of my obsessions! I was so excited to read this book and I was NOT disappointed.  These are quiet stories (as exploring nature sometimes is) but they are also fun adventures that take you to unexpected places.  Nature + imagination + great illustrations = a really enjoyable read.

Me: Can you tell us a little bit about your artistic journey?  When did you start drawing and/or painting?  How did that lead to where you are now as an illustrator of this book?

Benjamin: This is such a typical answer but as far back as I can remember I was always drawing.  I studied CG animation and worked in the animation industry for a while, before I decided to head towards illustration as it felt more natural to me. It is after moving to Paris and missing the outdoors a lot that I started writing Fox’s story.  As I grew up surrounded by pine forests and vineyards, writing these stories was sort of a way to escape the reality of the city that felt a bit oppressive.

Me: Can you talk a little bit about the process you used for this book?  Are you mainly a traditional artist, a digital artist, or a combination of both?

Benjamin: My first experiences drawing professionally were very digital, therefore I mainly stay a digital artist. Digital tools give me more control and flexibility. That said, I really try to give a more traditional look to my illustration.  That’s why I hand-painted all the textures you’ll be able to find in my work.

Me: Wow!  That’s incredible.  This story is such a unique one and a sequel too!  I love foxes, but I particularly loved the character of Fox you created in the first book (“The Golden Glow”).  I wasn’t sure there was room for a sequel, but I was pleasantly surprised that you explored under the sea in this book.  What gave you the idea for this picture book?

Benjamin: I wasn’t planning for a sequel either! But giving it more thought, I realized Fox was simply a very curious character and his curiosity had no limit. I guess could write a thousand stories about how Fox investigates into the natural world to understand how life works. Fox is basically an extension of me and my curious self, a way to give to others all the wonders I find in my readings and field trips.

Me: You have a great love of nature that is reflected in the main character of Fox, as well as in the stories themselves.  They share a great sense of wonder about the world around us.  Why is this an important message for you to share with young readers?

Benjamin: As Fox’s stories are a way for me to escape the city and the mundane, I want young readers to do the same. Go out of their everyday life for a bit and go on an adventure outside. Most people live in cities nowadays.  It’s really hard to find time to connect with all the living things and be aware of their existence. If my books can provide the littlest bit of connection between people and the other living things on earth, I’d be a very happy person.

Me: I haven’t seen anything quite like these stories before.  Did you pitch both of  these stories at once?  Or did they evolve over time?  Dare we hope for another book with these characters?

Benjamin: It was kind of an organic process. At first I only wanted to create a short animated film with Fox going through a variety of landscapes. But as I was sending my portfolio to various publishers with no particular project in mind, Les Editions de la Pastèque, the original publisher, in French, of The Golden Glow, told me they would be interested in reading a story with this Fox character.  I have always been very attracted to filmed documentaries about animals and plants,  and wanted to find a way to mix this cinematographic aesthetic with a more traditional picture book. In doing this, I was also very inspired by one French author and Illustrator from the 1960’s, Alain Grée.  Some of The Golden Glow spreads are a direct tribute to some of his books that I used to read as a kid.

Me: I love that.  What is one thing that surprised you in creating and/or illustrating this story?

Benjamin: I wasn’t expecting to spend so much time drawing the coral reefs actually!  I knew these were very rich environments with a billion different types of coral, algae and fish species living in a dense spot. But after gathering some documentation I realized reefs were really, really packed with life and I needed to be very generous with shapes and colors if I wanted to do it justice.

Me: Absolutely!  And those are some of my favorite illustrations in the book (though it’s hard for me to pick JUST one!).  Any advice for other aspiring picture book writers and/or illustrators?

Benjamin: Do picture books you actually care about. You are going to spend a lot of time reading, writing and drawing on one subject and life is too short to spend time on something you are only vaguely interested in.

Also, become a story nerd, there are a lot of ways to tell stories. You’ll find some in reading other picture books, of course, but also in seeing movies, going to the theatre, and listening to people telling you about their day.

Excellent advice Benjamin!  Thank you for stopping by my blog.

Dear readers, if you haven’t had a chance yet to find these picture books with Fox, I highly recommend them.  They’re not quite like anything else I’ve seen in the market.  They are a delightful exploration of an environment with a character who is in search of rare beauty.  Fox catalogues what he sees and brings the reader along with him, sharing his love of nature.  These are definitely not books you will want to miss.