I’ve always been one to gaze at the stars.  I find them endlessly fascinating and could spend hours doing so.  As long as it’s not freezing cold like it can be in winter here in Alaska when it’s the best time to go star gazing in Anchorage (because it’s ACTUALLY dark unlike summer).  So naturally, I related to today’s picture book character. 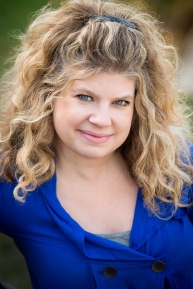 Marcie Colleen has visited my blog before a little over a year ago for her debut picture book.  I met her in person a couple of summers ago and she is just as lovely in person as she is online.  In previous chapters she has been a teacher, an actress, and a nanny, but now she spends her days writing children’s books! She is the author of THE SUPER HAPPY PARTY BEARS chapter book series with Macmillan/Imprint, as well picture books, LOVE, TRIANGLE, illustrated by Bob Shea (Balzer+Bray/HarperCollins), and PENGUINAUT!, illustrated by Emma Yarlett (Scholastic). You can learn more about Marcie at www.thisismarciecolleen.com or follow her on Twitter @MarcieColleen1. 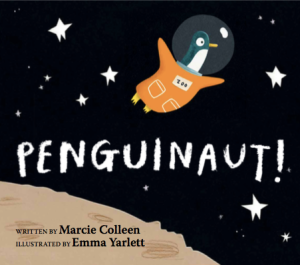 “Penguinaut!” is a cute story about a penguin at the zoo who has HIGH aspirations.  He is not content to watch all the other animals have adventures while he remains behind.  He too dreams of BIG things.  He hatches a plan to go to space.  It’s not your typical “penguin dreams of flying” storyline at all.  It’s not really even about “flight” per se.  And there are so many different little aspects of this story that really make it sing, it has to be read to be treasured.

Me: “Penguinaut” is a sweet and simple story that really captures how kids feel (i.e., small). Where did this idea come from?

Marcie: Back in December of 2011 a friend of mine posted the following on Facebook:

Now, as a writer, I can’t control where my ideas come from. And after reading this, I became so curious about penguins and their lack of necks which would prevent them from looking at the stars. I asked, “what if?” (that is what writers do, we are constantly asking “what if?”). 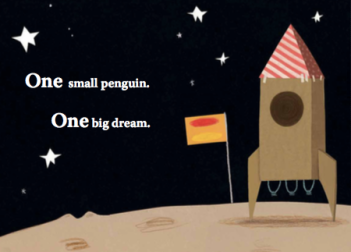 What if a penguin saw the moon for the first time? What if said penguin became obsessed with adventuring to the moon?

What kind of determination would be needed to explore a seemingly unreachable dream?

The theme of determination against all the odds fueled me from the start.

As with all stories, this one went through lots of revisions (39 to be exact!) and lots of re-imaginings. Along the way, while I lost the “falling over and discovering the moon” bit, the idea of being small in a world of big came to the forefront. That’s exactly how I feel when I stargaze: small and insignificant, yet like anything is possible. After all, anything is possible when there are flipper prints on the moon.

Me: Aww! I love that! I also love the humor of a penguin that not only wants to fly, but wants to go all the way to space. There’s your trademark wit! Did this story come before or after “Love, Triangle”? Can you tell us a little bit about its journey to publication?

Marcie: PENGUINAUT! was one of my very first stories and was written about two years before I thought of LOVE, TRIANGLE. I started the first draft in early 2012. As I said, it took on a lot of re-imaginings and iterations along the way, probably because it was one of my first manuscripts. I was basically learning the craft of picture books while writing it.

In 2013, I started querying agents with PENGUINAUT! and signed with Susan Hawk in June of that year. Susan is highly editorial, which I like, and the two of us worked on fine-tuning and polishing it before sending it out on submission in late 2013. It was my very first time on submission.

It was passed on by everyone we submitted it to. Strangely, most editors saw it only as a “penguin who wants to fly book” or simply “a penguin book.” And penguin books are a dime a dozen. It was clear that more revision need to be done to make Orville’s story stand out among the rest. After more revision, we took it back out on submission and PENGUINAUT! was sold to Scholastic in September 2014. It was my very first book deal.

LOVE, TRIANGLE was sold two months later in November 2014. It was a very good year.

Me: I love the twist at the end. How long did it take you to come up with a resolution to the story after Orville makes it to space?

Marcie: It took some time to perfectly establish Orville’s motivation for traveling to the moon. But when I focused on this idea of big versus small, not only physically but feeling big or small on the inside, it became clear that such a tiny penguin would feel huge having accomplished this enormous feat, while also feeling minuscule and alone on moon. Once that was set as the foundation, I knew what Orville needed—belief in himself and the support of those he loves—to fuel his trip back to Earth.

Me: The illustrations by Emma Yarlett are perfect for this story. I especially love how she drew the “blast off” sequence. Were there any illustration surprises for you?

Marcie: Oh, the spread where Orville is presenting his plan to go to the moon to his other zoo animal friends! In my “non-illustrator” brain, I would have designed this with Orville showing simple blueprints or whatnot. But Emma knocked it out of the park by having Orville use the elephant as a chalkboard! It’s brilliant! Definitely a great example that I use in many of the picture book classes I teach about leaving room for the illustrator and the magic of collaboration.

Me: What is one thing that surprised you in the writing of “Penguinaut”?

Marcie: I had often heard that in picture books every word, every sentence must be concise. Likewise, every word, every sentence needs to be put on trial for its life. This was something I strived for in my writing. While revising PENGUINAUT! with my editor at Scholastic I realized that I had crafted a story that was just that, concise with every word chosen with care. Every sentence was carefully curated. Nothing was extraneous. That was a good feeling, one of those moments that made me feel like a true storyteller.

Me: You now have several books to your name (yeah!). Any advice for aspiring picture book writers?

Marcie: Find your community, your tribe. It can be difficult to think of oneself as a writer. I know I would often choke on my response to “what do you do?” I, still to this day, feel like an imposter at times. And feeling like an imposter can rob me of the creative impulse I need to write. Therefore, find your community. Go to a conference or an in-person class or workshop. Be in a physical space where no one questions that you are a writer. In fact, they call you a writer, even if you can’t say it yourself. Having someone else treat you as such can be priceless…and you are worth it.

Me: Have you ever dreamed of going to space? Or maybe even space camp? Was that a favorite fantasy when you were a kid? Any obsessions with the stars you’d care to share?

Marcie: I have always enjoyed stargazing. I love how, much like Orville, I can feel both big and small under an expansive night sky. I feel big, in that all things feel possible when observing the wonder of the stars and planets. While at the same time, I feel like a small blip below its vastness.

I do have a favorite constellation. It’s Orion, the Hunter. I often look for him in the night sky and make a wish on his belt. I get excited when the light pollution is low enough to allow me to see his sword. But I am a city girl, so those moments are rare. Thank goodness, San Diego, where I now call home, has a low-light ordinance so I see Orion and his belt quite clearly. When I first moved, 3000 miles away from home, this was a welcome discovery. I don’t know what exactly draws me to Orion, but I have always felt a bit like “his girl,” knowing he’s there, looking down on me, bow in hand, ready to protect.

Oh my goodness.  Orion is my favorite constellation too.  I’m always looking for his belt when I’m star gazing.  How funny!  Thank you for stopping by Marcie and giving us insight into your latest picture book.

Dear readers, if you haven’t had a chance yet to track this one down, I highly recommend you do so.  It’s adorable illustrations and character will win your heart, but its clever turns of plot are also worth studying for their success.