Today I get to bring you an author-illustrator debut as part of a blog tour.  I’ve been waiting oh-so-patiently to share this one and today is FINALLY the day!

Welcome to the blog tour for Abi Cushman’s book “Soaked”!

Abi Cushman is a children’s book author-illustrator, a web designer, and a rabbit lover. When she’s not writing about sassy animals in her picture books, Abi writes about sassy animals on her two websites: My House Rabbit (yes, rabbits are verrry sassy) and Animal Fact Guide, which was named a “Great Website for Kids” by the American Library Association. Abi lives in a small Connecticut beach town with her family. You can learn more about her at her website.

“Soaked” is her author-illustrator picture book debut and it was released into the world just yesterday.  Yay!  IF I was to say it was about a very grumpy bear and a rainstorm, I wouldn’t be wrong.  BUT it’s so much more.  There are some cute and interesting friends in this story (a hula hooping moose? I thought drawing a moose riding a bike was hard!) who amp up the laughter.  I recognize that badger as any one of my first grade students.  There are SO many moments in this book that made me laugh.  It’s so much fun!

Welcome to my blog Abi!

Me: Can you tell us a little bit about your artistic journey? When did you start drawing and/or painting? How did that lead to where you are now as an illustrator?

Abi: I’ve always had an interest in drawing and painting. But it took me a long time to find my voice as an illustrator—to pinpoint that balance between realism, expressiveness, and good visual storytelling that was still authentic to myself. I also experimented for a long time trying to find the right medium. I needed a method that would work well at book size and also allow me to make revisions easily.

Me: What did your illustration process look like for this book? Are you mainly a traditional artist, a digital artist, or a combination of both?

Abi: I am a combination of both. I draw all my characters with a mechanical pencil on printer paper. I scan those in, and color them in digitally in Photoshop using a Wacom tablet. In general I also use the tablet to paint in the background. I like this method because I can work at book size, I can correct my mistakes easily, and I can adjust the layout as needed. But I still get that nice texture/feel of pencil on paper. The only downside of course is that I don’t have any fully-colored originals. But the goal is to create the best art I can for a book, and this is the method that gets me there. So I just have to let that go. 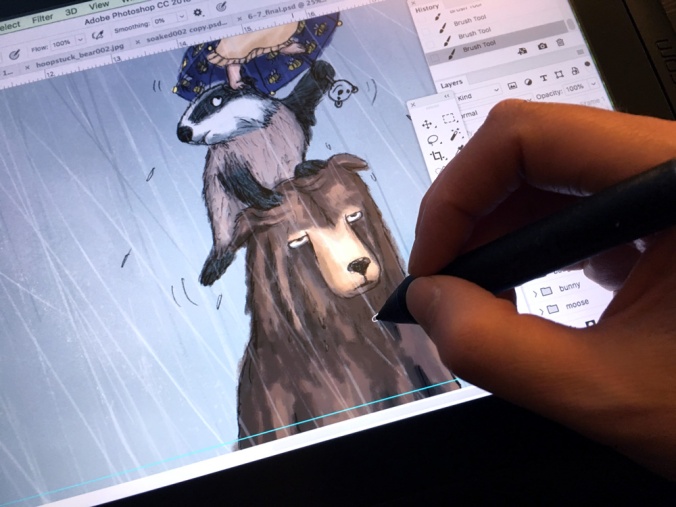 After I scan my pencil drawing into Photoshop, I put it on a separate layer and set it to Multiply. This leaves the pencil lines intact while allowing the color layer to shine through underneath.

Me: This is your debut as an author-illustrator.  Congrats! Which was harder: writing the story or illustrating it? Why?

Abi: Throughout my publishing journey, I’ve swung back and forth doubting my abilities as a writer and then as an illustrator. But hands down, illustrating the story was harder. It’s not to say that I didn’t have to make changes to the story—adding more tension and building up the narrative arc a bit—and that revision can be frustrating. But actually, a lot of the storytelling was visual, so writing and illustrating were intertwined anyway. I think illustration is more difficult because (at least for me), it’s time-intensive. It takes a lot of time to get the design, perspective, and color just right. And it’s very obvious when any of those things are off, so you have to just keep plugging away until you get it right.

Me: I love the details in your story. They are what make this story sing. I love that you combined rain (one of my favorite things) with a grumpy bear and a shrunken cashmere sweater. Though I admit the hoola hooping moose steals the show. What inspired these random but very specific set props in your story?

Abi: When I first thumbnailed the story, my initial thought was to have a dancing moose. I had him in the cave with glow sticks. But I thought I could amp it up a little bit more if instead, I made him into a hula-hooping moose (but I made sure the hula-hoops were still glow-in-the-dark for the cave scene).

The cashmere sweater came about also in my initial brainstorming session. I was thinking about things rain would ruin, and I had ice cream cones and sandcastles. A cashmere sweater was also on my list, and while I knew that it was more of a grownup (and privileged) woe, I did think the randomness was pretty funny, especially when applied to a bear. I also liked the repetition created with the C sounds (ice cream cones, sandcastles, cashmere sweaters). It had a nice ring to it. And I always wanted Bunny to at some point in the story start wearing Bear’s shrunken cashmere sweater but to have neither Bunny nor Bear ever acknowledge this transfer. Something about the lack of acknowledgement was funny to me.

As for the bear in the rain, an image of a sorry-looking bear in a rainstorm holding some sort of sad-looking prop was the inspiration for the entire story. I kept drawing different variations of that image in my sketchbook, so I knew there was something there. I just had to decide if I wanted Bear to be holding a tiny cake, a single wilted flower, a droopy balloon, or a soggy ice cream cone. 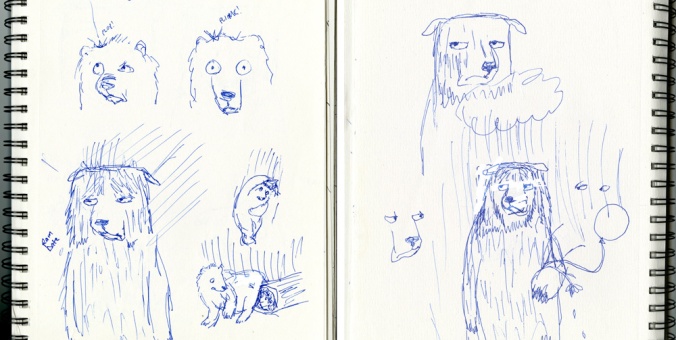 Me: Great use of consonance! Your book, your next book, your website, and your Animal Fact Guide website all display a love of animals. What draws you to animal characters instead of people characters?

Abi: I’ve always been drawn to animals and animal characters. My favorite books growing up all featured wonderful animal characters, such as those found in books by Richard Scarry and Beatrix Potter. And when it came to drawing I really only ever liked drawing animals. So I simply came to accept that and decided to stay true to myself and just stick with animal characters, even if it went against conventional advice to always put human kids in your portfolio as well.

Here’s a pastel of a lion I did in middle school. I liked drawing animals then and still do.

Me: I love that.  He looks kinda … unsure about something.  What is one thing that surprised you in writing and/or illustrating this story?

Abi: I definitely underestimated the amount of time it would take me to complete the final art for a 40-page picture book. 9 months. Though I was also juggling web design work and being a parent of small children. But still, I came to realize I’m not as speedy as I thought. I also had to build up my mental stamina to draw the same characters over and over, day after day, for months. I had never done that before, and it definitely took some getting used to.

Me: Any advice for other aspiring picture book writers and/or illustrators?

Abi: Keep an ugly sketchbook. Many illustrators have gorgeous sketchbooks. This is fine. But you should also keep an ugly sketchbook. This is a sketchbook with rough sketches, quick doodles, and little snippets of text that capture your IDEAS. You don’t worry about making anything beautiful. It’s not the place for that. Instead, record everything—no drawing is too embarrassing, and no idea is too stupid. Then later, you can go back through this sketchbook and pick through the good stuff to piece together scenes and characters for your next story.

This technique also works for picture book writers who are not illustrators. It’s simply a way to think about storytelling from a visual perspective, and you don’t need more than stick figures to capture visual ideas.

I absolutely LOVE that advice. Thank you Abi!  Dear readers, if you haven’t had a chance to read “Soaked” yet, grab a copy and laugh away at the wry sense of humor all throughout.  It may take you multiple reads, to enjoy the different bits.  It’s an absolute hoot!  Don’t let it pass you by, like the rain in summer.

12 thoughts on “Simply 7 with Abi Cushman–“Soaked””